Last night we went to see Bingo by Edward Bond. 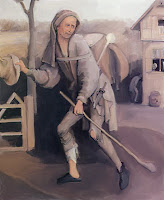 We were all pretty fed up with it, and bored at the absence of character or plot development.

I've since had the chance to think about it, and I sort of understand it better now.

Edward Bond is a avowedly Marxist playwright. He thinks he's the English Brecht. He's not writing entertainment – the point of the play is to drive home a point. In this case (as so often) it is that the process of capitalist development involves brutality and cruelty, which is graphically depicted on the stage and described off it. The point is introduced early on the play – Shakespeare meets the nasty Coombs character, who explains that his plans to enclose the common will hurt the poor but benefit the town in the long term. In a short speech he manages to articulate the main principles of capitalist economics – the self-regulation of the market through the price mechanism, the re-allocation of resources to more productive uses, and so on.
The rest of the play is just driving this home. There isn't really a plot, we just see the full implications of this being played out. The poor do suffer, the vagrant girl is hanged, violent disorder and protest is crushed with greater violence. The Shakespeare character is perhaps a proxy for the middle class audience that Bond expects to be seeing the play. He is unhappy about the suffering but is concerned about his own financial security, and so refuses to act. Most of the play shows him not acting, and meditating on the fact that he hasn't.
Unsurprisingly, this is not very enjoyable to watch. If there is another theme, it is that the family – particularly relations between parents and children, but also between husband and wife – are based on deceit and disrespect, not love. Both of the families depicted are unhappy, though the wife in the servant family is at least kind to her mad partner, while the wealthier Shakespeare is not kind to his mad wife.
So no plot really – just a long speech about the misery of capitalist accumulation, in period dress and with Shakespeare as a character because it's a play.
Here is the link to the good Wikipedia article about the play http://en.wikipedia.org/wiki/Bingo_%28play%29
By the way, the other playwright in the tavern is Ben Johnson – Christopher Marlowe was dead by 1593, and the play is set later, around 1615, when Shakespeare is old.
Posted by Jeremy Green at 1:46 AM

I read Michael Billington's review in the guardian today, some of it along the lines you sketched, and some more. He concluded, that this performance has sealed the play as a modern classic.
That is perhaps the clue why despite all the intellectual energy that went into the play it did not really knock us of our seats. Bond's take on horrid capitalism and the failure of the intellectual middle classes is blunt, Brechtian in that sense, yes, but just not anything new. What it lacked, and most Brecht plays seem to have, if I remember correctly, is the sense that the poor and disposed can do something about it - and we are witnessing quite a bit of it currently. Unless I missed those lines, there was nothing in the play that led from what it depicted to what it should be or could be - not a happy end, but a possible path to take.
I also think that capitalism is far more complicated that the fairly black and white treatment seems to suggest.
And I reserve the right to be entertained - in the Brechtian sense: I am all for allienation in the theater, to be taken out of the story and reflect on the reality of my own life, toggling between these modes as the play unfolds. This play didn't do it for me.

Bond doesn't think is Brecht. Bond would be disgusted by such a thought. Bond despisses Brecht. Brecht was a liar - that's is why he could justified and sided with Stalin- , Bond is not.
With Bond think of the ethical not of the ideological .