Review of "Why it's all still kicking off" by Paul Mason 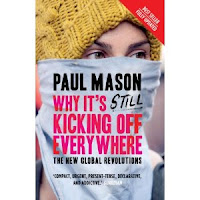 I really like Paul Mason. He writes very well, about stuff that is important. This book is in many ways a survey of the present moment - or rather an update of a slightly earlier survey of a present moment - and so it's inevitable that there will be things in it that look a bit dated or have turned out differently. That is no reflection on Mason, only on the limitations of writing a book versus a more 'hot' medium. Of course a book makes for longer and more thoughtful treatment of complicated subjects than a twitterfeed or even a blog, and you can read it in a different way, more slowly and flicking backwards and forwards.

This book is about the intersection of social, cultural, technological and economic trends – and shows how these have affected and driven a series of not-all-that-connected events, from the Arab Spring to the underclass riots in England. He writes with insight and passion about the places where strange ecounters are taking place, between slum dwellers (the arse end of the globalized economy) and what is in effect the lumpen-intelligentsia (the arse end of the globalized education market), which he characterises as the graduate without a future. He covers the unhappy meeting-points between the traditional organized labour movement and the more radical, deliberately non-organized horizontalist protest movements.

He has a real feel for the limitations of both, and understands the all-too-real risk that the latter will fall in love with itself. I'd say that was more of a certainty than a risk, and that in a few years time no-one but left history anoraks will remember the Occupy movement; it will be there in the roll-call of missed opportunities to build a new kind of movement, along with the Dialectics of Liberation and Beyond the Fragments.

Unlike many others writing about new social movements he's got a good understanding of the opportunities presented by new technology, though here too he is aware of the limitations and the risks. I think he should have managed a hat tip to Evgeny Morozov's “The Net Delusion”, but you can't have everything. In general the book feels well-researched and has lots of references.

Now a couple of negatives. Considering he's Newsnight's economics editor there isn't that much economics in it, which is a shame. That relates to my other criticism – that he's a bit weak on the relationship between the new technologies that he writes about and the labour market. One of the reasons why all those graduates don't have a future is that the jobs for which their institutions were created to prepare them are going away. Arts and humanities graduates were created to fill the middle layers in bureaucratic organisations of the public and private sector, because mass market manufacturing and service delivery required much complex interaction.

Information technology has done away with a lot of that interaction, replacing the live labour of the bureaucrat with the dead labour of the software programmer. Better software based on more, clever code and using more powerful processors and network protocols has done away with lots of what we once thought of as 'creative' jobs – remember how RobertReich thought we were all going to become 'symbolic analysts'? The graduates without futures are the people who were prepared for symbolic analyst jobs that don't need doing any more – software does it better.

Second negative: I don't understand Mason's bromance with Manuel Castells. I watched Mason introduce and interview Castells at an LSE event (later broadcast on the BBC) and I thought that Mason himself was much more interesting and personally engaging than Castells. I'm not sure whether Castells is as special as Mason seems to think he is, or as Castells himself clearly thinks he is. In particular, I don't think that the 'alternativeeconomic practices' that he makes so much of are all that important. In another time we used to call that the 'grey' or the 'black' economy, or just spivery. Is this really the basis for a new society growing within the shell of the old, or is it just old-fashioned cash-in-hand work and bartering, perhaps facilitated by some new mechanisms of trust and recommendation supported by the internet? And is it therefore really a basis for a challenge to corporate capitalism, or a sort of weedy consolatory 'Poujadism of the Left', to cheer ourselves up that we can't afford the stuff that we used to? I'm all in favour of people not buying crap that they don't need, and it would be lovely if we could just bypass the structures of capitalism to create a pre-figurative socialist society based on mutual aid, but I am not convinced that the 'alternative economic practices' that both Castells and Mason seem so keen on are leading us there.

Oh, and one more thing. Mason works for the BBC, and good luck to him for that. Sometimes that sends the Daily Telegraph into a howl of rage because it “proves” the corporation is really run by Trotskyists. My concern is the opposite one; who is providing this kind of coverage of alternative movements useful to? It was Susan George who said that radical intellectuals should study the rich, because any research into the poor and their mechanisms of solidarity would ultimately be used against them. I don't at all intend to imply that Mason is a turncoat or a traitor or anything like that. His book is inspirational; but not everyone who will read it is looking for inspiration.

But hats off to Paul Mason for writing what is a really very good book about where we are at and where it might go. It's made me think more than a whole lot of meetings and magazine articles, and it deserves to be read and debated widely.