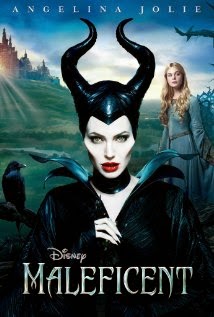 I really couldn't see the point of this. I'm all in favour of retellings of traditional fairy tales, and I've really liked some of those (not to mention my own One Shoe Tale, of course). But this is dire. You can tell it's going to bad from the very start, because the Disney castle that appears in the opening credits become the castle in which the not-very-nice king lives. Yes, he lives in the pink Disney castle. Later on it inexplicably becomes rather gloomier, but the overall sugar-coated-ness of the story never goes away.

It's supposed to be the backstory of how the bad fairy got to be bad, but she mainly isn't. She's wicked for about ten minutes, before her heart melts and she tries to undo the evil that she has unthinkingly created. Similarly Aurora, the girl who become Sleeping Beauty actually only sleeps for ten minutes, before Maleficent wakes her with a loving kiss - not the Prince, though there is nothing event slightly homoerotic about the girl-on-girl kiss, it's a mother's love even though Maleficent isn't actually Aurora's mother. And Aurora does end up marrying the Prince who failed to wake her with a kiss, because it's not that radical a retelling, despite the big dragon-fight sequence in the castle which I don't remember from the original fairy tale.

A vanity project, I'd say.