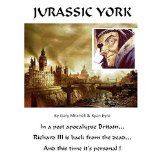 This book is a hysterical mash-up of Shakespeare, Star Wars, 1984 and Brave New World, the Carry On films, dystopian cyberpunk…well, it’s just wonderful. There’s a tongue-in-cheek Hibernophobia about it, but I don’t think any Scots people could really take offence. The plot is at least partly borrowed from Star Wars, but set in a fictional future England (Scotland having become independent long ago) ruled by a cloned and re-vivified Richard III, who is just as nasty as Shakespeare makes his first incarnation.

Lots of quoting from Shakespeare and contemporary pop songs, tons of humour, characters with names from contemporary British politics, a feminist slant (the warriors are mainly girls because lots of men died in a plague a while back)…what’s not to like?

A slightly serious point; the Wars of the Roses were the classic period of so-called “Bastard Feudalism”, when traditional loyalties and obligations broke down and political relationships were fluid and fast-changing. I think it might have been better to depict a contemporary version of “Bastard Feudalism” (after all, our contemporary Tories fit the bill on most counts) rather than try to squeeze the plot of this on to a precise mapping of the Yorkist-Lancastrian divide. I think the authors could have more fun with Johnson and Cameron, or their latter-day avatars, than they do with revivified defunct noblemen.

But that’s a quibble. This is enormous fun, and much to be enjoyed.
Posted by Jeremy Green at 6:58 AM