Review of 'The Wonders' 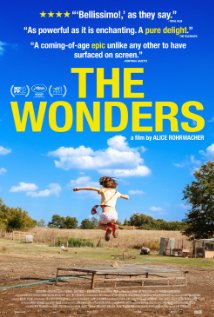 A bleak and depressing film about artisanal agriculture and food production in Tuscany - an antidote to all those films in which that setting is necessarily idyllic. A family keep bees and produce honey at a near-derelict farm. Lots is not explained - there's a German father, his Italian wife who is constantly on the brink of leaving him, another German woman (who is she?), and four daughters who provide child labour for the honey business rather than going to school. There's also a young German delinquent boy, left by a social worker in what is supposed to be a reforming placement, though if she had had any eyes to see she wouldn't have left a dog with these people. Somehow the eldest daughter, the only one with any brains and talent, comes across a tacky agricultural-themed reality show in which contestants are required to dress up as ancient Etruscans and pitch their businesses to a studio audience. Neither it nor the business itself go well; the film is a bit of an illustration as to how some people just aren't very good at life.

Interesting ideas and characters, a dismal setting and bleak cinematography, but too long without enough happening - I had several micro-dozes during the film.
Posted by Jeremy Green at 3:45 AM