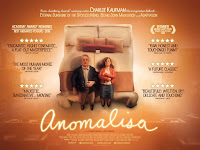 A creepy, uncomfortable film about a man crushed by the sheer mundane-ness of his life. It's an animated film, and the animation is more like caricature than an attempt to look either realistic or cute. The characters move clumsily, and the proportions of their bodies aren't quite right. This emphasises the awkwardness of the people and the situations in which they find themselves.

The central character is voiced by David Thewlis, as an Englishman who has long lived in LA - he's an expert and motivational speaker in customer service, and is in Cincinnati  to give a talk. The faux-glamour of the business hotel, the meaninglessness of his presentation, the depressing taxi ride from airport to hotel - it's all captured perfectly. There's also the most awkward, unbearable sex scene, and some horror nightmare scenes in the basement of the hotel.

Not everyone liked this film, but I thought it was really evocative and affecting.

Watched in the Middle Floor at Springhill via a laptop and informal distribution.
Posted by Jeremy Green at 12:04 PM

Imagine sitting in a cinema with your son watching the awkward sex scene.