Review of 'Eisenstein in Guanajato' 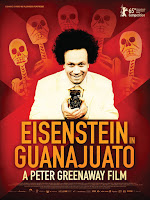 Peter Greenaway must have had a lot of fun making this, but the same can't really be said for the audience. It's visually striking, in a sort of hybrid Greenaway/Eisenstein sort of way...striking images, striking montage. Eisenstein is a very sympathetic, jaded virgin, at once still in love with The Revolution but losing his illusions about the USSR.

Not devoid of merit, but not worth the time spent watching it either. I put this on in the Common House in Springhill, and by the end most viewers had gone.
Posted by Jeremy Green at 5:25 AM