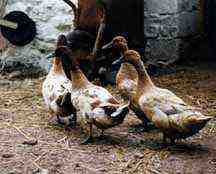 Fed up with slugs in your garden, but don’t want to start using pesticides? Tired of going out last thing at night to pull the revolting slimy things off your broccoli? There is a solution, and it’s 100% organic and requires (nearly) no effort. Get yourself a couple of ducks.

I’d wanted to have poultry from the time we first acquired a garden. My great-aunts had had chickens in their tiny yards in North London. As a small child I had watched, fascinated but a little scared, as they strutted their stuff and scratched around the concrete. I’d watched The Good Life as a kid, and as a student I’d read Undercurrents Magazine and thrilled to the idea of urban self-sufficiency. Now that I had all this land (well, thirty metres by ten, actually) I felt like I needed some livestock.

It took us years to get round to it, though. My wife was the one that took the most interest in the garden anyway – I just liked reading about self-sufficiency; actual digging usually left me exhausted for days. She put most of her efforts into growing a few veg – beans, carrots, sweet corn and pumpkins. The slugs put most of their efforts into the veg too, though. We never saw a single sweetcorn. We did get a single pumpkin – some weird genetic mutant that only came up the year after we planted it, and which must have given off some odour that repelled slugs. Nothing much else managed to escape them. We had strawberry plants, some of which even fruited – but the slimy ones always got to the fruit before we did.

We were still committed to not using poisons. We found some organic anti-slug deterrent, which we sprinkled all round the veg beds. The slugs obviously couldn’t read the packet, because they weren’t deterred at all. We made beer traps – we dug great moats around the beds, lined them with bin liners and filled them with the slops from the local pub’s drip tray. We used to go round on a Friday evening with a bucket, which the staff always cheerfully filled. If any of you are reading this, we were telling the truth, we really did want it for the slugs – we weren’t drinking it. The moats worked better, but still the slugs got through. I don’t know whether they flew across, or climbed across on the bodies of their fallen comrades, but they still managed to get to the broccoli, and the courgettes, and anything else we planted.

But a weekend away on an organic smallholding in Cornwall changed our lives. The small farmer – he was quite a big bloke, actually – had half a dozen Indian Runner ducks on his property. We helped him collect the eggs in the morning, and I confessed my long-held desire for poultry in the garden. “They’re really no trouble,” he said. “And they eat slugs, too.” Suddenly my wife was interested. The following week I swung into action with the aspects of gardening I like best. I bought “Country Smallholding” magazine, and a mail order copy of “Raising Ducks in Your Back Garden for Fun and Profit.” In between a terrifying chapter on poultry diseases and a grim section on how to kill and butcher your ducks for meat, I learned the basics.

The first, and most important, is that you don’t need a pond. Ducks are quite happy with a plastic washing up bowl full of water, provided that you change the water every day. They drink out of this, dunk their heads in it – apparently they don’t have very good tear ducts, so their eyes can sore if they can’t dunk – and occasionally jump in it for a bit of a splash.

The second important thing is that you need somewhere to shut them up at nights, a little shed called an ark. They don’t need very much room in there – ours is about the size of a dog kennel, with a door that bolts. We built the first one ourselves, but we made it out of chipboard, so it rotted away in about half a year. We replaced it with a flatpacked affair from Forsham Poultry Arks, which is sort of the Barratts of the poultry world.

The ark is partly to keep them quiet till you (and your neighbours) are ready to get up – they will start quacking when it gets light – but also to keep them safe from predators. Since we got the ducks we have had regular visits from our local neighbourhood fox. In fact, we have put our ark inside a larger (three metres by two metres) chicken run, made out of wooden frames with chicken wire, and with a concrete floor to keep out the fox. This isn’t strictly necessary, and Forsham sell a smaller ‘rye run’ which fits on the front of the ark. When we are in the garden, or even in the kitchen, we let the ducks out to wander round.

We cover the floor of the small ark with straw, which we pile in quite deep. I don’t know if they really need it to be so deep, but it’s the only luxury they get, and it does look a bit more cozy when they are sunk down into it. Changing the straw, which the ducks “enrich” heavily, is the only nasty job associated with having ducks. On the other hand, the straw is great for the compost.

The nicest job is collecting the eggs. Our ducks are Khaki Campbells, which is a good laying breed. Most days each of them lays an egg. They started laying in the Spring, and were due to stop laying once the days got too short. But they didn’t seem to know this, and apart from a few really cold days in December laid all through the winter.

There is surprisingly little to do. Every morning we:

unbolt the door and let them out,
collect the eggs
replace the water in the washing up bowl
put a cupful of grain and a half a cup of layer pellets in another washing up bowl.

The whole thing takes less than five minutes a day. At night we shut them up in the ark – this was a bit fraught at first, because they didn’t really understand what we wanted them to do. But now it’s a well-established routine, and most nights they put themselves away when it gets dark.

Once a week we change the straw in the ark, and put the old straw in the compost bin. At the same time we put a cupful of grit in another bowl. The ducks need grit to replace the calcium they lose by making egg shells, and also because they use it in their gizzards to break up the grain so that they can digest it.

We were a little worried that the ducks would damage the plants in the garden, but it hasn’t really been a problem. They do peck at the grass a bit, but it doesn’t seem to have done it any harm. We put a bit of chicken wire round the vegetable beds when the plants are young. And their webbed feet do much less damage to the garden than chickens’ claws would have. They don’t seem to do that frantic scratching thing that preoccupies chickens for so long.

And the slugs? They love them to death. They spend most of the Spring and Summer poking around with their bills, rooting among the dead leaves and under the plants. They got lots of the slugs early in the year, before most of them had had a chance to lay eggs; and they must have hoovered up most of the remaining hatchlings too. At any rate, we were hardly bothered by them at all last year, even though our neighbours’ crops have been devastated. And we haven’t bought an egg since March 2002.
Posted by Jeremy Green at 10:51 AM

I'll be darned. I had never though about ducks as bug and slug control although I have kept chickens for that reason