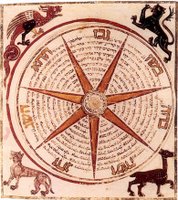 Most Jewish festivals lend themselves to a secular celebration, based on finding some contemporary dimension to a historical commemoration. Hanukkah is a good time to reflect on both religious freedom and national liberation, Pesach suggests a contemplation of freedom from slavery, and so on.

Rosh Hashana and Yom Kippur are not well suited to this approach. Unlike almost all the other festivals, they don't commemorate a real or imagined historical event. And they are all about things that don't seem to make much sense outside of a religious context – judgment, confession, sin.

So is there a way into these festivals for secular Jews? Well, let's start by looking at the historical background.

There's not much about Rosh Hashana in the torah. Whereas Leviticus goes into some detail about how to do Yom Kippur and Sukkot, Rosh Hashana is defined as a day of 'complete rest... commemorated with loud blasts', but there's not much else – and it's not called a New Year celebration at all. That's not too surprising, because the ancient Israelites seem to have celebrated their New Year in the Spring. Originally the Hebrew months had numbers rather than names, and by convention Tishri, the month in which Rosh Hashana happens, is the seventh month rather than the first.

For a herder community, the year did begin in the Spring, with the birth of the New Lambs. For a community engaged in more settled, arable-based agriculture, the Autumn harvest was a better time to mark the end of the year. So at some point the Israelites must have changed the time at which they deemed the year to have started. In fact, it's slightly more complicated than that, because Jews later recognised four new years – a New Year for Kings, used for counting the years of the reign and other civil purposes; a New Year of cattle, used for counting animals for tax and tithe purposes; a similar New Year for trees; and the religious New Year, in Tishri.
Of course, having more than one New Year, and changing the date at which New Year is celebrated, are not restricted to the Jews. Britain has a separate 'financial year', and the custom of celebrating the beginning of the year in January doesn't go back beyond the eighteenth century in this country.

But the transformation from herders into agriculturalists meant more for the calendar than just moving the New Year. Herder could make do with a lunar calendar – one based on the phases of the moon. Farmers need more from a calendar, particularly if they have some form of state organisation with taxes and so on. In particular, they need to be able to fix some dates in a way that is consistent with the seasons – so that the harvest festival comes at the right time of year, for example. As they settled down the Israelites moved from a fully Lunar calendar to a 'luni-solar' one.

The Israelites' dating system was based on twelve lunar months, each beginning and ending at the New Moon (the Hebrew word for 'month' has the same root as the word for New Moon, just as our word 'month' has the same root as 'moon'). But twelve lunar months gives you a 'lunar year' of just 354.36 days – well short of the 365.25 (ish) days needed for a solar year. If you use a purely lunar calendar, you soon get out of sync with the seasons.

Originally the Israelites solved this problem by adding in ten days 'between' the years. These ten days were neither part of the old year nor the new one. Incidentally, lots of other cultures did the same thing, in Asia and in Europe; in medieval France the peasants had a twelve-day between-years period, with each day representing one month in the year to come. For the Israelites, their ten-day period was a scary time. Without the proper preparations, the New Year might not might not start auspiciously, or might not start at all. So the ten day period was marked with rituals of purgation and sympathetic magic. The custom of eating sweet food to ensure that the coming year is sweet, and of eating dishes of sliced carrots (which are alleged to resemble gold coins) are examples of sympathetic magic. Fasting, the scapegoat ritual and its successor kapores, and the custom tashlikh, are all purgation rituals (the Romans did something similar before their New Year in March, and the word 'February' comes from the Latin word for purgation).

There are lots of common elements with a Babylonian festival of Judgment that also took place in the Autumn. This is what you'd expect – partly because the Babylonians had a similar luni-solar calendar, and partly because much of what we think of as the Jewish religion was defined during the period when the Judaean ruling class was in exile in Babylon. The Jewish month names are the same as the Babylonian ones, and follow the names of the Babylonian gods (ask a Rabbi to explain that one).

Eventually, the Jews worked out a better luni-solar calendar. They discovered what is sometimes called the Metonic cycle, after the Greek astronomer who worked out the relationship between the solar and lunar cycles, and concluded that the two calendars could be brought into line by the addition of an extra lunar month in seven years out of every nineteen. For a while, the decision as to whether to add an extra month was made empirically, first by the temple priests and then by the Sanhedrin which succeeded them. In the fourth century (the fourth century by Christian reckoning, that is, though the Christians were not reckoning it that way at the time) Hillel 2nd set down the calculations used to make the decision.

But even though they had a better calendar which no longer needed the ten between-year days, the Jews kept their ten day festival of purgation, just as they'd earlier kept the tradition that the New Year was in Tishri but the first month was Nisan, in the Spring.

Does any of this matter? Well, I think it does. Firstly, because an understanding of some of the historical and anthropological dimensions provides a way into celebrating the festival for those of us who find praying ridiculous. Secondly, because it illustrates the way in which Jewish culture isn't at all something constant and unchanging, but rather is built up of many different layers, each a product of a specific set of historical circumstances. And it's kind of nice to have a link back to something that the Babylonians did.

And thirdly, because it gives a nice insight into the 'watchmaker' argument. Religious people often point to the way in which the universe is, for them, well arranged, and then claim that this is proof of the existence of God – if you saw something as complex and well-made as a watch, you'd assume a watchmaker, they say. Well, the calendar is a brilliant human response to a not very well ordered celestial clock. The cycles that are observable from earth don't relate exactly to each other, and the attempts to make an order out of this has resulted in some of the most brilliant science and some of the most bitter religious and cultural disputes. If the celestial clock is a watch made by God, then he's either an incompetent or a sadist.

(NB. Much of this a shameless plagiarism from Hershl Hartman's "The Jewish New Year Festival: A guide for the rest of us". Hershl is a vegvayzer in the Sholem secular Jewish Community in LA. Naturally, his document is longer and better - all the mistakes and over-simplifications are my own work.

There is also a very good detailed explanation about the Jewish calendar in Wikipedia.
Posted by Jeremy Green at 7:59 AM