Reflections on The Year of the Flood 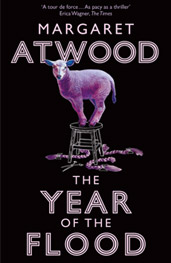 I've been thinking a lot about 'The year of the flood' lately. I read it a couple of years ago, but I haven't stopped thinking about it. It's a good novel – not exactly enjoyable, because it is a dystopian fantasy, but very thought-provoking and not entirely devoid of hope.

It's set in the same scenario as 'Oryx and Crake'. There are some good characters and plot twists, but the real business of the book is the group known as God's Gardeners. The group is interesting because it is a survivalist cult with liberal, left-wing leanings. The group is religious in form. It prays, it has sacred books and songs, and it teaches its youngsters through catechisms and repetition. There is a strong suggestions that this has been a deliberate strategy by leaders who don't believe literally in their own religious teachings, and who have covertly used aspects of the modern world like computers that they present to their followers as somehow unkosher.

The Gardeners expect that some sort of catastrophe is coming – the 'waterless flood' – and their practices are mainly about preparing for that. They teach the members, especially the young ones, how to grow food, prepare medicines from natural materials, and how to defend themselves against attack. They prepare stashes of food and materials in secret, inaccessible places called Ararats, and they learn how to get by without many modern tools and social structures. Perhaps most important, they prepare mentally and culturally for the inevitability of disaster. Although their ideology might be thought of as deep green, they are primarily survivalists rather than political activists, though some are involved in conventional political activity sometimes.

When it comes, the flood is not what they seemed to have been preparing for. It's not triggered by the internal contradictions of a civilization that has drawn too heavily on its supporting environment and fouled its own nest, though Atwood depicts that toxic reality very well. Instead, the collapse is caused by an extraneous factor – the laboratory-made epidemic distributed via combined aphrodisiac-contraceptive pills described in Oryx and Crake. The plot concentrates on the experiences of a few of the Gardners, both before and after the collapse. There is no attempt to portray the survivalism as an overwhelming success, but it nevertheless does help a few cult members to live through at least the initial stages of the disaster.

Survivalism is rare among greens. This is surprising really, because lots of us are not particularly optimistic about the future. A lot of the climate change activists that I know have little faith in the readiness or the ability of politicians or states to deliver the change needed to prevent even runaway climate disaster. “Sustainable business” is mainly greenwash, and community action and bottom-up initiatives are whistling in the dark – they make the people involved feel better, but they do nothing to turn the supertanker that is our catastrophe-bound civilization.

So why aren't more of us preparing our own personal or even communal adaption and mitigation strategies? Is it because it isn't done to admit defeat on the political question, for fear that if only we had held on and continued to believe we might have achieved a happy ending? Or because we've grown up with too many movies and books in which the central characters win through in the end, despite overwhelming odds and a seemingly-impossible situation?

Interestingly, the Right doesn't have this problem. Before their recent turn to climate scepticism, the BNP used to think a lot about ecological catastrophe – particularly around the issue of Peak Oil, which fitted nicely into a nationalist world-view. Rightwing blogs and websites carried a lot of discussion about how to move to the countryside, grow food and prepare for the coming collapse. I haven't looked lately, so I don't know if it's still there – there is only so much poking around in those corners that one can take.

Perhaps it's time we at least started to have some conversations about community-based responses to climate change. To its credit the Transition Town current (which elsewhere I have been rather critical of) at least does this, albeit in a rather apolitical, Poujadist sort of way. At least it's a start. Time to engage; at the very least, the sign of us actually preparing to deal with catastrophe will have some rhetorical value, as evidence that we really do think that the shit is going to hit the fan – that we are not just talking about climate change as part of some bureaucratic conspiracy to cheat honest Daily Mail readers out of their God-given right to cheap electricity and petrol.
Posted by Jeremy Green at 1:34 PM