Web of Things company Evrything and Plato's theory of forms 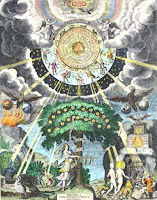 Went to see Evrything yesterday - an interesting Internet of Things start-up with a heritage in the really rather clever Web of Things group at Zurich University. Lots to say, much of which I will cover in a proper Ovum report in our new 'On The Radar' format. A few things that won't go into that can go here though.

I couldn't help being struck by some of the philosophical aspects of what the company is trying to do. Essentially it wants to create a digital version of physical objects, and to use this to link to applications and control systems. It's not all that interested in exactly how to establish the linkage between the physical and the digital object - it knows that this can be done, and that there are various communications media and protocols that can be used. It's more interested in managing the digital version of the object. There is no particular reason why the digital version of the object should not continue to live on after the 'death' of the physical object from which it was derived - the digital avatar of my Ikea table lasting longer than the table itself.

This reminded me of Plato's theory of forms, whereby actual cubes are but imperfect copies of the 'real' cubes which exist in the perfect world of forms. I think that the Gnostics developed something of a spiritual and moral doctrine out of this, and a theological one that said that the imperfections of the physical world proved that it was created by a malign demiurge rather than the perfectly good God who was the real ruler of the universe.

Not sure exactly what relevance this has to Evrything's technology or business model, but I can't stop thinking about it - and about the implications of physical manufactured goods beginning to have digital lives of their own, separate from their physical antecedent.
Posted by Jeremy Green at 9:59 AM