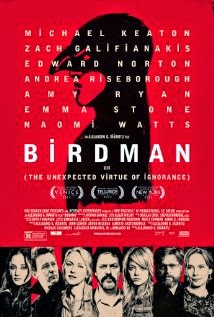 A successful Hollywood actor in late middle age, best known for his performance in a super-hero franchise (the Birdman of the title) wants to put on a serious literary play on Broadway, doing the adaption and the directing and appearing as one of the main characters. He’s a bit troubled (drug addict teenage daughter, ongoing relationship with ex-wife, relationship with younger woman member of the cast), and he may be actually delusional – the film shows him as having super-powers, but only when no-one else is around, so he may be imagining this. He also hears a voice in his head, which turns out to come from the Birdman character. Oh, and he really doesn’t understand social media, which is presented as a near-disability.

Making the play turns out to be difficult – theatre people (especially an important reviewer) sneer at him, he doesn’t understand social media, the bankable actor they get to play the other male lead is not only arrogant but a bit of a fuck-up, and there are some amusing slapstick scenes as well as some dark ones with hints of suicide.

The delusions and the voices, play games with what we thing is real in the story. Most of the time this is pretty obvious (we know he can’t really fly or move objects with his thoughts), though sometimes it isn’t. What really distinguishes this film, though, is the cinematography – the use of colour, and the almost total absence of jump cuts. I am only certain about one; apart from that it’s all pans and zooms. There really aren’t any cuts, which give the film a really eerie quality.

It also made me think about ‘Maps to the Stars’. Actors, and film people, really do exist in a series of tightly interlocking personal networks. Their reputation, and their personal contacts, are their capital – so who snubs and blanks who really is of fundamental financial significance to them. Of course, this is the human social world that we all live in, and it’s these pecking orders that make us both happy and miserable. But for ‘arts’ people it is literally their livelihood and their material well-being as well as their social relations that are at stake, which is why they seem to have so much capacity for unhappiness despite their material wealth. Just saying…