Review of 'Going Clear: Scientology and The Prison of Belief' 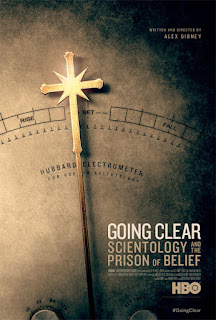 A documentary about Scientology, based on a book, that reveals a lot about the inner workings of the 'church' but leaves a lot of questions unanswered. The main one is 'how come Scientology got to be so powerful when it's obviously ridiculous and run by repellent people?' L Ron Hubbard, the founder, was fat and ugly with bad teeth. So how come? Perhaps part of the answer is that there's nothing so stupid that it won't attract some people, and that the need to belong is so strong that once in some people will find any number of reasons not to leave, however nasty. Look at the WRP, for example. I do rather wonder if there was a relationship between the 'church' and some US government agencies; it does seem to have had rather an easy ride from the authorities. Trouble is that lots of the commentary on Scientology is almost as nutty as they are, so of course there are suggestions that it was a front for the CIA, and the Illuminati, and so on.

The film is a bit on the long side, with lots of testimony from ex-members about the nasty stuff they did, and how it ended up being done to them. I was really struck by the inter-cutting between clips of these people denying that they did some nasty stuff, and other later clips admitting that they had done the same nasty stuff; because what it shows is that demeanour is no guide to truthfulness. We tend to believe that we can tell when people are lying by looking at them. The movies and TV have taught us to believe that people look shifty when they are lying, and that we won't be taken in. Actually, they don't. Maybe decent people squirm a bit when they lie, but bad people, and people who think that it's OK to lie for a purpose, seem not to. Yet our system of justice is in part premised on the idea that ordinary people will be able to tell who is telling the truth.
Posted by Jeremy Green at 3:47 AM