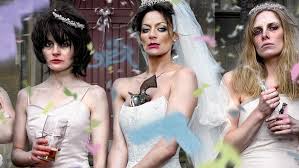 A made-for-TV film, watched via the All4 app and Chromecast - actually the first thing I've watched in exactly that way, as until recently All4 didn't support Chromecast and playing it via TV and an HDMI cable from a laptop was a really miserable experience.

This is billed as it's a comedy, and it just about is, but it's very dark - child abuse, drunkeness, drug abuse, other forms of addiction, violence, suicide, murder...it's got the lot. It opens with a dockside execution by the four women and goes on in much that vein. There are scenes in a mental institutions, a nurse dressed as a nun jerking off an elderly patient...if that's the sort of thing that bothers you then you won't like this.

But it's also got four very strong women characters, played by really good actors (Michelle Gomez has been a favourite since Green Wing), and a sharp script written by Irvine Welsh. For an English viewer it was sometimes hard to understand (I had to turn up the sound to quite loud and listen to a few sections more than once).

Well worth watching.
Posted by Jeremy Green at 6:06 AM