Review of 'How I stopped being a Jew' by Shlomo Sand 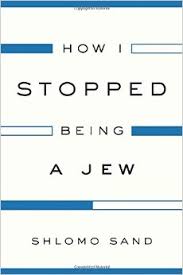 A hard one to review, because it arouses such mixed feelings. Shlomo Sand is a clever, sharp thinker and writer who says a lot of sense about Jewish history and Zionism. He’s got an honest perspective on where Zionism came from and how it has turned out. He understands what Israel has done to the Palestinians, and what Zionism means for both Israelis and for diaspora Jews – which is not the same, but related. In this very short book he gives a potted history of the Jews that isn’t bad, though sometimes the language is over-complex and academic. For the record I entirely agree with it, and with his disappointed hope that Israel would recognise an Israeli nationality and build its own identity around a civic nationalism that wasn't explicitly Jewish. I think he argues some of this with a great deal of sensitivity, and it’s hard to find fault with it.

He’s left out some of the personal anecdotes that he sprinkled through the ‘Invention of the Jewish People’ that I rather liked, though there are some new ones that also help to build sympathy with what might otherwise seem a somewhat unsympathetic position.

Which is, that there isn't really any such thing as a ‘secular Jew’, and that those of us who want to define ourselves that way are both deluding ourselves and also giving tacit support to an ethnocentric and even racist ideological perspective on Jewish history – and one that might once have been just a harmless fantasy but is now intrinsically linked with a racist political system in Israel. And my problem is that I can see some validity in what he says but I don’t want to agree. He rather makes fun of people who disagree with him, and tells the story of a meeting at the London Review of Books bookshop (which I attended) where he presented his views and where the liberal Jewish audience appeared to be arguing that he was wrong because they were allowed to define themselves however they wanted to.

Having spent more than half of my life feeling like a non-religious, non-Zionist Jew it’s not nice to be made fun of, or to be told that one’s self-chosen identity is (like all identities, but more so) a fiction. If I felt confident enough to argue with him (which I don’t, because he’s a sharp debater with lots of good examples at his fingertips) I’d say that he persuades himself with a certain sleight-of-hand. He seems to accept that even if there never was a ‘Jewish People’ there was a Yiddish People, created in the same way and at much the same time as the Polish or Lithuanian People. I think he’s a bit flaky with his chronology but we can let that go. He says that Yiddish people has ceased to exist as a result of the holocaust and Zionism and successful assimilation, which I can accept.

But I'm very clearly the grandchild of that people that were part of that people, or at least its tail end. I can accept that there isn't a successful self-sustaining secular Jewish culture that has a creativity of its own. I've tried to be part of passing on the remains of its legacy to my kids (and other people’s kids), and though we had fun I don’t believe the exercise was particularly fruitful. And still I don’t see why I need to repudiate my personal history to gratify the need that others (Israel, the Orthodox, Shlomo Sand) have for sharp and clearly defined boundaries. If others want to say that being a Jew is a religious identity, or a national one that requires loyalty to the ethnos, then I'm going to differ, out of loyalty to myself and my personal history, but also because it’s useful politically to do so. So I won’t stop being a Jew just now, thanks Shlomo. You be what you like, and so will I.
Posted by Jeremy Green at 6:48 AM

See this for a Zionist but intelligent comment on Sands' other book. http://en.idi.org.il/analysis/articles/review-essay-the-jewish-people-deniers/