Review of 'The Circle' 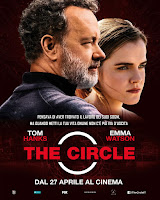 Not time well spent, this one. I really liked the book, which seemed to be a rather good satire on life at Google but also on the implications of social media for our civilisation. It came at a rather significant time for me; I read it just before I 'joined' Gartner, and the fictional culture of The Circle went some way towards preparing me for the highly metric-driven culture of my new employer.

But the film is a bit lame. In the book Mae's naivety is sort of picaresque, and sort of believable. In the film, seeing it performed by an actual human, it's not - she's too stupid to live, or at least to thrive as she does. Some of the elements that I most liked in the book (like the importance of her time away kayaking by herself, which is here turned into just a sucker's lesson about the value of 24-hour 'safety' surveillance) are not really included. And the denouement is different from the book, and it's ambiguous but not in a good way. Are we, the audience, still supposed to believe in the redeeming power of technology to make the world a better place, once it's in the right hands and the evil bad guys are exposed to the same transparency they want to impose on everyone else? I think we are.

Watched via Netflix and Chromecast. Can't remember the last time I watched a good film from Netflix.
Posted by Jeremy Green at 3:52 AM