Review of ‘Slouching towards Bethlehem’ by Joan Didion 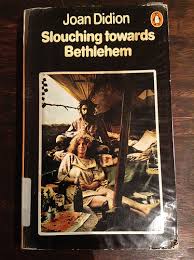 I must have read this years ago, because I found a well-read copy in my book collection, but I have almost no memory of the contents. Perhaps that’s because the writing is more about a feeling – what it feels like to be Joan Didion – than anything else. There are essays about how it felt for her to be a young woman moving from California to New York in the early 1960s, and how it felt for her a little later when the attractions of the city began to pall. There is a sneering piece about a middlebrow, middle of the road think tank called the Centre for the Study of Democratic Institutions, another in much the same tone about a ‘school of non-violence’ run under the auspices of Joan Baez, and a rather long essay about Haight-Ashbury in the later 1960s that put me in mind of ‘Through a Scanner Darkly’.

It’s nicely written, and I’ll seek out more of her old stuff, even though I don’t quite like her.


I was mainly struck by how contemporary it all feels, even though it was written and describes a world of fifty years ago. It’s recognisably still my world, despite the absence of all the technologies that I make use of during most waking minutes. Even the cover photo, which shows Didion and a beardy man in some sort of tent with a vase of flowers and a bottle of wine in front of them, could have been taken at last year’s Womad. That’s weird, isn’t it? We talk so much about how fast things are changing – but I am sure that if my parents had read a book in 1958 (the year of my birth) that depicted the world of 1908 they wouldn’t have felt it was their world. So when was the disjuncture? The war, or the post-war boom?
Posted by Jeremy Green at 2:46 AM