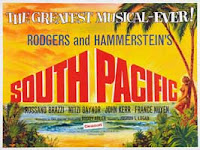 One of those musicals that you think you've watched, but you haven't - you just know all the songs. Finally got round to watching it yesterday, and found it long, a bit tedious, and shapeless - the plot seems to meander along with a few meaningful incidents but no real dramatic tension. Like a lot of Rogers and Hammerstein, it seems to spend a great deal of time setting up the scenario and then resolve it very quickly.

And yet this is a famously anti-racist musical, with one song about how people become racist (not one that anyone knows, You've Got To Be Carefully Taught) forming the emotional and intellectual centre of the show. It was denounced at the time as 'inspired by Moscow'. The sentiments are much better than the standard liberal guff about racism. Oh, and when the original musical went on tour, Rogers and Hammerstein refused to let it play in segregated theatres.

And there's more, which rather passed me by while watching - some of the 'native' characters are not Polynesian but Vietnamese, deported to the islands to work on the French plantations. There's even a slight gesture in the direction of gender identity - while the female lead is singing a song in which she's a guy singing about her 'honeybun' girl, the guy who runs the laundry drags up for the big show within the show to entertain the troops, although we know he's brave and comfortably male.

Watched in the Common House at Springhill on a proper DVD.
Posted by Jeremy Green at 9:18 AM

I saw this first when I was 7 and wondered how they managed to have a beautifully light world behind a screen in a dark cinema. I wanted to go behind the screen but I was told it wasn't really there. Never got over that experience. Haven't seen it since. Didn't pick up the nuances then but might have another peek after this.