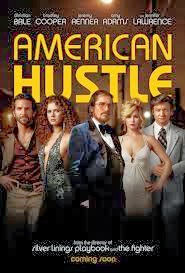 A film about confidence tricks, so a fairly confusing plot, things that seem implausible, and a twist at the audience's expense. I'm not sure I followed every twist and turn, and most of the characters were flawed and mainly unlikeable. Not that characters have to be likeable, but it's a long time to spend in the company of quite so many sleazeballs.

The tone is set in the first few minutes with the lead character arranging his comb-over. This is at once about deception (because comb-overs are about pretending you have hair when you don't) and slightly disgusting – not sure why comb-overs provoke such disgust, but they do, and the effect is enhanced by some close-ups of an ugly pot belly.

Despite all this repugnance I quite enjoyed the film – it didn't feel like time wasted, anyway.
Posted by Jeremy Green at 9:58 AM