Review of 'Dial M for Murder' 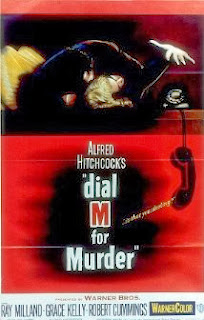 Seems odd to be reviewing this sixty years after it was released, but it was the best thing on at the Bristol Watershed cinema on the weekend we happened to be there.

It is of course a great film. Somehow the Britishness stops it from being too noir - it would have been much more so if it had been American, and/or black and white. Most of the time it seems very contemporary, and then there is some glaring period detail that reminds us as to how much has changed. Grace Kelly's accent is remarkable - it seems that the register of women's voices has changed much more than the male ones. Only the Queen sounds like that now, though most upper class women in films seem to have spoken like that.

The plot itself would never work now, because Margot would never get out of bed to answer a call, and the evil Tony would never have to wait to use a phone booth.

Surprisingly the original was made in 3D and we watched it a 3D version, which worked very well. There weren't lots of 3D-specific scenes, but the near-murder itself was much enhanced by Margot's arm coming out of the screen and into our faces.

Not a feel-good film, but it nevertheless left us with a good feeling.