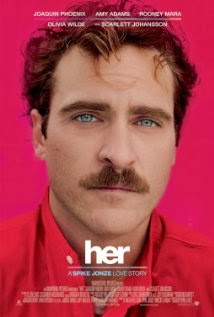 A surprisingly moving film. From the descriptions and synopses doing the rounds I didn't expect to like this - I imagined a film about a geeky, tech-obsessed man taking refuge from real human relationships by falling in love with his computer. I might not even have gone, but Ruth and I were in Barcelona, exhausted from walking all over the city, and this was one of the few original-language films available at a cinema we could imagine walking to.

I couldn't have been more wrong. The main character, Theodore, suffers from a surfeit of empathy - his job involves working for beautifulhandwrittenletters.com, which does what it says on the tin; writes beautiful personal letters for people who are unable or unwilling to write their own. Theodore's letters are warm and charming, full of sympathy and wisdom.

And the disembodied operating system with which he falls in love is also a complex, developing character, learning what it feels like to feel, and managing the disjuncture between human emotions, the absence of a body with which to feel them, and the consequences of having non-human enormous processing power and multi-tasking capability for relationships with humans. The film works through all these complications with considerable sensitivity. Some of the time I felt a little lump in my throat. It made me think about the way that I mediate some personal relationships through technology - the Facebook friends I never meet with in real life, and so on.

The film is also visually stunning, with contemporary Shanghai standing in for a future LA - sometimes sumptuous, sometimes bleakly sterile. I rather liked the Arcade Fire soundtrack too.

Very glad I saw this.