Review of "The Saragossa Manuscript" 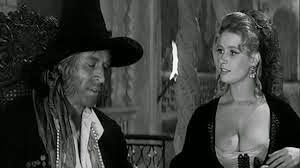 Watched this yesterday, as part of the 'research' for the sequel to One Shoe Tale – last saw it at Sussex University in 1976, when it was shown by the Film Society. Then, I thought it was magical, and I was not disappointed this time.

Mystical, surreal, beautiful, and still a good yarn – or rather an increasingly complex sequence of nested good yarns. Not terribly PC; Edward Said would doubtless take offence at the orientalism, and I'm sure that some viewers might not enjoy the rather charged eroticism.

But it is just great, and I feel validated that in the time since I last watched it Martin Scorsese and others have funded the creation of a new print. They obviously like it too.

Oddly, the book on which it is based is really short, and the film does not cover everything that is in the book, and yet it's a really long film. And also oddly, though most of the nested stories are resolved so that we go back to the story in which they are told, the film ends inside the first level of nesting; we don't go back to the original frame tale, in which the manuscript is found. Does the fact that I find this mildly annoying say more about me than it does about the film?
Posted by Jeremy Green at 8:29 AM