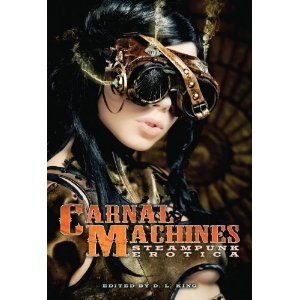 A very mixed collection - well, that's how it is with anthologies, isn't it? At least one reviewer has speculated that all the stories are written by one (male) author. I don't think so - they're different enough, and variable enough in quality.

Some of them really worked for me, and others made me want to skip quickly on to the next. Quite a few stories in which men are raped by machines. I liked best those that took the steampunk technology for granted rather than made it the focus of the technology, and those that managed to do a workable pastiche of Victorian style.

A number of the stories feature female oriental villains which rather reminded me of Christopher Lee as Fu Manchu, even though the characters are mainly women. Is that OK in a retro context?

General thought is that I still haven't found much steampunk fiction where the writing lives up to the visual aesthetic - the cover is rather better than the stories!
Posted by Jeremy Green at 12:45 AM