Review of 'The Commune' 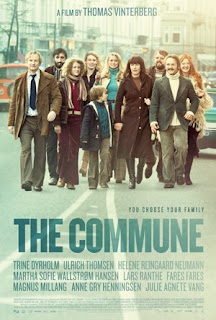 A really touching, sad film inexplicably billed as a comedy. Well, quite a few laughs, but the main focus is not the challenges of communal living. Instead it's about adultery and infidelity, and what that does to the people involved. The architect-professor who owns the house in which the commune is situated (something he reminds the communards when they confront him at one point) starts an affair with one of his students, and his successful TV producer wife is tolerant and understanding, and suggests he brings his lover to live with them rather than risk losing him altogether. It does not work out well. Does this ever work out well? Are there films (or books, or accounts) of successful happy non-exclusive sexual relationships? I only ever see the other ones.

There's childhood illness and death, and the coming of age of a young woman, going on in the background. It's nicely filmed in a way that really evokes the period. The dialogue is a bit clunky (translation?) but most of the emotional force is carried by the characters' faces rather than their words. Is that a Scandinavian film thing? Perhaps it is.

I note in passing that this is a Swedish-Dutch co-production but set in Denmark, for reasons that I don't understand.

Watched in the cinema - The Phoenix in East Finchley - with a small audience.
Posted by Jeremy Green at 1:11 AM