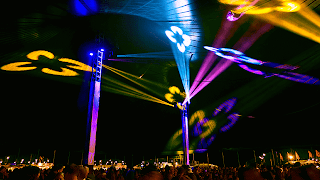 Womad 2016 was lovely, and mainly erased the memory of all the rain-soaked misery of last year. Among the fabulous things and bands we saw were:
We actually did a dance workshop led by Mariana Pinho, who was so pregnant she looked like she might give birth at any moment; this was billed as samba but turned out to be quadrilla, which was probably all for the best as far as I was concerned...quadrilla turns out to be an easy country dance sort of thing.

We went to the Big Green Chat Show on Saturday morning, led by Jon Snow of Channel 4 News. Guests included: Dale Vince of Ecotricity, who was really very impressive and talked about the company's plans for green gas based on bio-digestion of grass (much better than poo, apparently); The One Show reporter Lucy Siegle (also of The Guardian); and head of sustainability at IKEA Joanna Yarrow - both also much more impressive than I was expecting.

One other thing we liked - the Paguro upcycled bags and wallets, made from old inner tubes and so on. May buy some when it's present-time.