Review of 'The Death of Stalin' 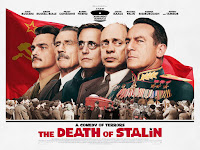 A well-made British 'comedy', with all of your favourite character actors, about the last days of Stalin and the aftermath. Ought to be required watching for anyone still a bit soppy about the USSR. Not many laughs, though the couple next to us seemed to find lots of it very funny; even the absurdities of the dictatorship and the bureaucracy can't be very funny against a background of so many juidicial and extra-judicial murders.

A few odd things; what seems to take a few days in the film (death of Stalin to fall of Beria) actually took a year. Almost no mention of anti-semitism, though of course it pervaded everything - even the references to the Doctors' Plot are without a mention of Jews, though that's what it was about.  And I didn't much like the depiction of Nikita Kruschev as a wise-cracking New Yorker - I much preferred the way Bob Hoskins played him in Enemy at the Gates, as a rather coarse USSR native.

But these are quibbles, and it's a really good film. Ruth and I couldn't help but think about our grandfathers who had so loved Stalin.

Watched at the Everyman Cinema in Muswell Hill.
Posted by Jeremy Green at 4:09 AM