Review of 'The Other Side of Hope' 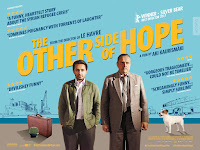 Pleasantly quirky and uplifiting film about a Syrian refugee who ends up in Helsinki. We see the wheels of bureaucracy preparing to deport him to a situation it deems safe even as the news reports the massacres, some Fascists who try to kill him, but also lots of nice ordinary decent Finns (and some desperate down-and-outs too) who rally to his support. It's a lot like Le Havre, but in Finland.

Some visual jokes, notably that though it's contemporary everything looks like it's in the 1950s or some other recent-history period. The restaurant where the refugee ends up working is stuck in a time-warp in terms of decor and cuisine (a reminder of the time when Finnish food was considered the worst in the world), the restaurant owner drives a 1950s car, and the truck driver who smuggles in the sister has a vintage mobile transportable from the early 1980s - which wouldn't even work now, the network on which it ran having long been closed down. Not entirely sure why any of this - I've noticed it in other Kaurismäki films, notably the noire Hamlet that we saw at the Sydney Film festival in the early 1990s, which was all Soviet-style plumbing and industrial locations.

Watched in the Middle Floor at Springhill via laptop and projector, having been obtained via informal distribution.
Posted by Jeremy Green at 4:00 AM