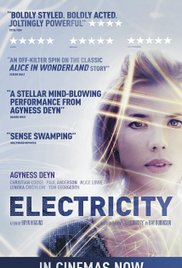 I didn’t know anything about this – just found it on BBC iPlayer while looking for something to do, but it was really rather good. It’s about a Lancashire girl with severe epilepsy searching for her lost brother in the London underclass, and it’s beautifully shot and very well acted, with lots of emotional depth.
There are a few implausible plot developments (everyone she meets is really nice to her), and she seems to have an enormous cool wardrobe contained within her small wheelie suitcase; in fact she dresses rather too well for the character she is supposed to be playing.
But it’s quality British drama all the same. Lots of stuff about how people can manage their conditions, and about how they are treated as they do so - something I hadn't thought about much for years, but this made me think about it again.
I was sort of puzzled why it appears to be set in the North East when it’s not in London, even though she’s from Lancashire. Maybe that was explained somewhere and I missed it.
Posted by Jeremy Green at 12:56 AM