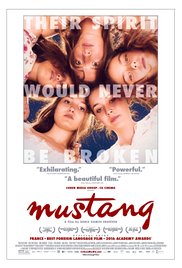 A beautiful, sad film about five young girls growing up in a rural community in North Eastern Turkey. Though the reviews seem to present this as a ‘coming of age’ story, it’s something rather nastier than that implies. The girls are brought up by their conservative grandmother and their patriarchal uncle, both of whom are very conservative and apply increasingly strict controls over their lives. The house is gradually turned into a prison from which a family-arranged marriage is the only sanctioned escape, and the girls respond to this in different ways. There are a few light moments when they occasionally break out, but it becomes increasingly dark and claustrophobic. A good advert for mainstream feminism and modern liberal urban life; almost the only decent man in the film is the gay truck delivery man befriended by the girls (they do refer to him as ‘queer’, but it’s only the slightly unusual facial hair that marks him out).

It's a Turkish-German co-production, with great music. It also has a sort of German look to it, which set me to wondering whether that was measurable. Are there national (or personal) styles in film making that would be revealed by statistical analysis – length of static or panning or zooming shots, length and angle of close-ups, time between cuts, etc? I wonder whether there has been any work on this. It seems so obvious that I can’t help thinking someone must have done it.

Anyway Mustang (I don’t know why it’s called that – a Turkish cultural reference that is lost on me?) is a good but sombre film.
Posted by Jeremy Green at 6:41 AM