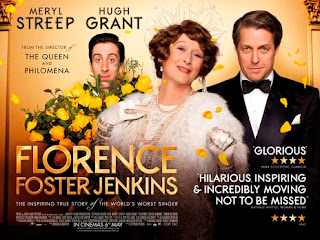 Much lighter than the recent French film ‘Marguerite’, which was a more fictionalised version of the same story but dwelled more on the tragic aspects of the story. The acting is more camp and over-done, though it’s interesting to see Hugh Grant actually acting. It still has some poignancy, especially in terms of the relationships that MFJ develops with the men around her, who come to care about her feelings enough to protect her from realising how dreadful she is. It also doesn’t shrink from the fact that she had syphilis, which is surely a first in a film designated as suitable for general viewing. And it manages to imply that her pianist is gay without over-doing it.

Also beautiful to look at, in the interiors, the lighting, the costumes, and even the long shots down New York avenues – how did they manage to get the city back to the 1940s? I noticed in the credits that some of it was shot in Liverpool and Glasgow – I wonder which scenes. And a lovely scene with 'Sing Sing Sing' on a gramophone at a party.

Watched at Woodford Odeon, with my mum, in a surprisingly full cinema for a Wednesday night.
Posted by Jeremy Green at 12:02 AM