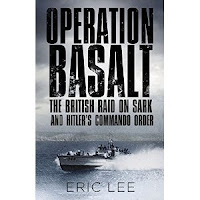 A well-written and gripping account of a little-known incident in WW2, this book also raises interesting questions about the nature of historical memory and the purpose of writing history.

In October 1942 with the Axis powers still in the ascendant the British launched a small-scale raid on the German-occupied island of Sark, one of the smallest of the Channel Islands. It was a tiny pinprick against the Nazis, yet it had significant consequences, not only of the people whose lives it touched but also for others far away – civilian and military prisoners who were caught up in the cycle of repression and counter-repression that it triggered, and all those Allied soldiers engaged in commando and partisan warfare, who were henceforth to be summarily executed if captured.

Eric Lee conveys the military and political context of the raid with a deft touch, setting out the background without labouring it. He also describes the raid itself with all the skills of a thriller writer, and it’s easy to imagine oneself there with the commandos, stumbling about in the dark and finding that things aren’t the way they look on maps or aerial photographs. I couldn’t help thinking how we have become used to our present surfeit of information – I can look up any of the unfamiliar terms in the book in a second (even when I’m on a train, as I did yesterday), or check out a Google map or street view of the places mentions. Then, the commandos and their leaders back in Britain had little idea what was going on in the islands – almost impossible to contemplate now.

On the other hand, the extent to which the raid unleashed a round of information warfare seems very modern. It’s hard to believe that the Nazis claimed to be the injured party in breaches of the ‘rules of war’, but they did.

One other thought struck me. This event was relatively recent, and well-defined. It took place within the context of military bureaucracies that tried to keep accurate and detailed records, and several of the participants left eye-witness accounts.

Yet it’s already impossible to dis-entangle some of the details – how many prisoners did the commandos take, and how many casualties were there? What happened to one of the civilians who played a key role? It’s to the author’s credit that he manages to solve some mysteries, shed some light on others, and admit where he is unable to do either.

This is a great and enjoyable book, and I look forward to reading more history by this author.
Posted by Jeremy Green at 3:12 AM