So I read another Le Carre, and I liked that too - was taken by the way in which his characters  - or at least Smiley - are in the Cold War, but not entirely engaged to its ideology. They are playing a game, with sides, but they know that they are not entirely different from their adversaries. It does spend a lot of time in the world of emigre societies, and probably doesn't dwell enough on how nasty some of those groups were - former fascists and collaborators, not just freedom-loving nationalists. On the other hand, the locations and the physical details are great.
Posted by Jeremy Green at 11:50 PM No comments:

I've missed out on John Le Carre. I read The Honourable Schoolboy years ago, and didn't like it - not the plot, the characters or the writing. And I thought, he's writing about the world he knows, and that means he's a bit like that - posh, a former spook, what is there to like?

But now I want some familiarity with spy novels, so I thought I'd give some of his earlier work a go, and I realise I have indeed been missing out.

This is so good - all the things I didn't like about the schoolboy, I love here. The characters, especially the central character, is great, conflicted and complex. It's told in the third person, but mainly from his POV, so it's artful in keeping up all the deceptions that make the plot work - Leamis doesn't tell us all that he knows about what is going on, and sometimes seems to not even tell himself.

One of the things that really struck me was the close attention to physical detail, which really evokes the world of the 1960s, a world before computers and smartphones (before any mobile phones, of course). I can just about remember this world myself in all its grittiness...and realise that while it was much poorer in lots of ways, it was also more abundant in others.  For example, the Liz character has her own bedsit...now she'd have to share a house or flat with others, and perhaps a room too. And Leamis just bounces into a job in a library via the Labour Exchange, even though he has no job history at all.

I won't try to summarise the plot for fear of spoilers, but it's just great.

Posted by Jeremy Green at 11:39 PM No comments:

Review of The Good Liar

Sort of disappointing film about a nasty conman getting his come-uppance. Ian McKellen is the conman, and he's so nasty that it's impossible to feel any identification with him at all. Helen Mirren is his chosen victim, a recently bereaved woman that he meets through a dating site, and she plays it a bit better.

I'd have thought that anything with those two in it would have to be good - why would they agreed to be in a turkey?  Also Russel Tovey and Jim Carter, usually in good things.

But this comes quite close to being one a turkey. The last quarter, where the twist occurs, feels rushed and not related to the rest of the film at all...is it the same in the book on which it's based?

Posted by Jeremy Green at 12:25 AM No comments:

Ruth introduced me to Francis Spufford - she read "Light Perpetual" first, and then I followed her and thought it was great. And then she did this one, and recommended it, and it's also great - even better than Light Perpetual. It's a historical novel, set in New York in the 1740s, and has something of the flavour of a pastiche C18th style, brilliantly done with some nods in the direction of historically accurate spelling and grammar, but not so much as to make it hard going. The plot is always engaging, the writing beautiful, and I'm really jealous of his ability to describe action as well as inner life. And the politics, about race and sexuality, are spot on.

It reminded me a bit of the Neal Stephenson's Baroque Cycle, which I loved, though there are no conscious anachronism here as there are there...and also of John Barth's The Sot-Weed Factor, which I haven't read for many years but also did something similar with period and style.

I note in passing that there is a description of a plot to burn the great houses of the city, which has been foiled and the perpetrators executed and tortured to death...and that this was a real historical episode, described in some detail in The Many Headed Hydra.

Posted by Jeremy Green at 1:24 AM No comments:

Somehow I'd never got round to seeing this, even though it's a classic...but our local film club was showing it. We couldn't go, so I obtained it and we watched it a few days later.

It's really good, with Henry Fonda as the liberal juror who gradually wins over the other members of a jury in a murder case, worrying away at the details to convince them, one by one, that there are after all grounds for reasonable doubt in what at first seemed like an open-and-shut case. All character actors, a claustrophobic theatre-like setting in one room, and lots of close-ups of the jurors' faces. For me Lee J Cobb as the last to be convinced steals the show.

Posted by Jeremy Green at 6:33 AM No comments:

Weimar-set police procedural/detective thriller...well, the central character is a detective in the Berlin police but he's a lone wolf a lot of the time, and the procedures are mainly there to be subverted.

Nicely written/translated, and atomspheric, with some decent characters and setting descriptions. I must admit I got a bit confused about exactly who some of the characters were, especially the cops. Is that the German names, or the fact that the non-stereotype ones are not actually that differentiated?

Better than the TV series - no deliberate anachronism or lazy history inaccuracy. I could imagine reading more from what the cover establishes as a series.

Posted by Jeremy Green at 1:17 AM No comments:

Tense, atmospheric and stylish film in depression-era America, with sleazy circus folk, geeks (the original kind, a horrible circus act in which a man is kept in a cage and bites the heads off live chickens), mind-reading acts and fake spiritualists. Very dark, both in substance and appearance, but some great acting, fab cast, and painterly shots by director Guillermo de Torro. Amazing interiors too!

Posted by Jeremy Green at 3:10 AM No comments:

Review of 'The Making of the British Landscape' by Nicholas Crane 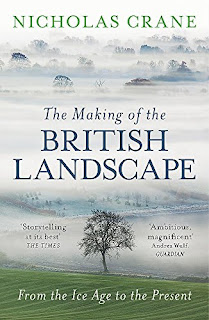 A bit of a disappointment. Lots of things that I would have expected to be in there weren't...no mention of the Forestry Commission, for example, or the creation of the New Forest, or the Charter of the Forests, or game laws. Something of an over-concentration on towns once they get going, and on the built forms therein, rather at the expense of the landscape itself - even though he acknowledges that towns even today don't make up the greater part of the landscape in this country.

And within the towns no examination of come all the good bits came to be owned by a few aristocrats, nor how they managed to keep them - and why they so much want to. Nothing about the various attempts at a different politics of land - the Chartists land projects, the Henry George socialists, ideas about land tax. Not even the National Trust rates a mention.

Not much examination even of the idea that there is a 'British' landscape - even from the book it's clear that England, Wales and Scotland have very different landscapes, and that these were shaped by different geological, economic and cultural forces. That's just his default unit of examination, but it's not one that he reflects on very much.

Still, I did learn lots of things, particularly about the draining of the Fens and the end of Whittelsey Mere. I felt sad reading about the demise of the big wild animals in Britain, and I went to look up the various attempts to 'de-extinct' the aurochs. They've all failed - extinction really is forever.

Posted by Jeremy Green at 4:23 AM No comments:

Review of The Goldfinch 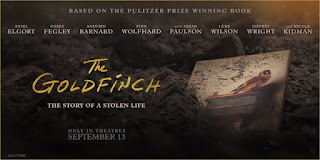 Really good, complex, film, with lots of good characters, plot and acting. I've not read the book, and I understand that even at nearly three hours long the film leaves a lot of complexity out, but it's still very good. Split narrative going backwards and forwards between time-periods, with different actors playing the younger and older versions of some of the characters - though not Nicole Kidman, who manages to play both versions of her character.

I won't try to summarize the plot, but it's well worth watching. I understand it was a box office flop, which says more about audiences than about the film.

Posted by Jeremy Green at 9:03 AM No comments: