Review of 'The Anubis Gates' by Tim Powers

Not read any Tim Powers before, and I ended up really liking this. It's a bit of a romp, with touches of horror too (and I try to never read horror) but it's clever, and well-written too. There's plenty of action and suspense, but good characters and emotional depth - even the bad guys have their own inner life and problems.

I don't know that much about the Romantic poets, but I have the feeling that Powers did his research here - Byron and Coleridge are both characters in the plot, and they feel right to me. So does his early nineteenth century London, which includes lots of streets and neighborhoods that have now disappeared.

Posted by Jeremy Green at 10:33 AM No comments:

Review of 'The War in the Air' by H G Wells 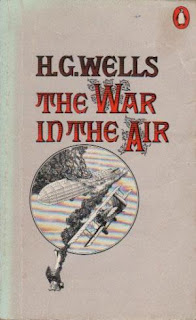 Re-read after many years, and not as much fun as I remember it having been. Desperate to gratify my craving for steampunk, but it's hard to find anything that's much good. Perhaps I've muddled it up with Michael Moorcock's 'Laughter of Carthage' series.

I remembered this as having lots of airship combat and ornithopters, but there isn't all that much; and the dialogue - Wells' pechant for transliterating working-class speech so that the characters who use it seem rather stupid - really grates.
Posted by Jeremy Green at 9:15 AM No comments: 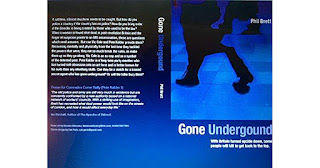 A worthy successor to 'Comrades Come Rally', Phil Brett's sequel is set in the same post-revolutionary Britain. Our hero Pete Kalder is recovering from trauma in a sort of therapeutic community, but is soon pulled out of convalescence to help unravel another plot to reverse the gains of the revolution. It's tightly plotted, with lots of twists, good characters and vivid descriptions of locations and settings - plenty of long meetings, which made it all feel sadly rather true to life...that's probably what a post-revolutionary Britain would be like. Kalder is a great wise-cracking, sharp-dressing lead, with an encyclopedic knowledge of mid-C20th music and a trust-nobody attitude that gets him into trouble with the party and the remnants of the police. An enjoyable read, and I hope there's more to come.
Posted by Jeremy Green at 9:04 AM No comments: