Still wonderful, even on a third watching. When I wasn't concentrating so much on the plot (or on deciphering the Hebrew subtitles, because the first time I saw it was on Kibbutz Hasolelim in Israel) I could appreciate how sharp the script is, and the shooting, and how great the close-up shots are.

Watched in the Middle Floor at Springhill via informal distribution, laptop and projector.
Posted by Jeremy Green at 3:35 AM No comments: 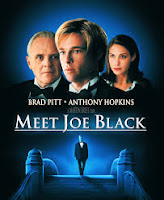 Pretty awful...Death comes for a powerful, successful media magnate, but then he does a deal whereby the magnate can have some extra time on earth if he introduces Death to the pleasures of real life. Why Death has waited so long for this (pleasures include trying peanut butter, and falling in love with the magnate's daughter) is unexplained. Death incarnates in the form of a beautiful young man who'd just met the daughter and then died in a stupid road accident, and this leads to some mystery, and some laughs, and lots of inexplicable and nonsensical plot lines.

It all ends sort of happily and stupidly. I was struck by how utterly rubbish the plot was, and how ugly the American version of opulence looks - the magnate is very rich, and all of his stuff is really repulsive (though it's not supposed to be). The film is very long; although the script is terrible the acting isn't too bad, and the cinematography is occasionally OK.

Watched in the Middle Floor at Springhill on a DVD.
Posted by Jeremy Green at 2:59 AM No comments:

Review of 'Paris and London in the 18th Century'

I'd forgotten what it's like to read a book written by academics for academics. This is 'studies in popular protests,, but it's definitely not for a popular audience. It's proper academic history, from primary sources, and it assumes that everyone knows the main outline of the events covered. I remembered some of that from A level history - who the Hebertists were, and so on - but I'd forgotten lots, which meant that it was only possible to read this with Wikipedia at hand.

And it's more than a bit repetitive, partly because it's actually a collection of essays once published separately, so it makes the same point again and again - mainly that 'the crowd' and 'the mob' consisted of respectable members of the 'lower orders' (artisans, craftsment, small shopkeepers) rather than either proletarians-in-formation or criminals and vagabonds. It also makes it clear that popular protest often wasn't  about what we'd think of as progressive politics - in England there was always a strong element of chauvinism and Protestant supremacy.

Not a fun read though - I think I'd rather have re-read Mark Steel's Vive La Revolution again.
Posted by Jeremy Green at 8:09 AM No comments:

Review of 'My Cat Yugoslavia'

Strange and not entirely satisfying. A young Kosovan man who is a refugee in Finland, and is gay but not entirely comfortable about it, lives on his own, but has a pet boa constrictor for company. And then he meets a talking cat at a gay bar (the cat is sort of homophobic, but the young man and the cat seem to have sex, though it's hard to be sure), and the cat moves in with him.

There is a parallel narrative about his mother as a young girl in Kosovo, in a very traditional patriarchal and conservative community. The Kosovans all love Tito but socialism doesn't seem to have had much impact on their way of life or material well-being. It all goes horribly wrong, first for the young girl and then for Yugoslavia and Kosovo. The family flee to Finland, where her horrible husband is even more bitter and unpleasant to his wife and children, who eventually run away from home...so that one of them can become the young man of the other narrative.

The cat becomes progressively more unpleasant as a lover and house guest, and the young man becomes pitifully and slavishly devoted to him, echoing the way his mother was like a slave to his brutal and nasty father. And then, on a trip to Kosovo to visit his grandparents, the cat just vanishes, and doesn't reappear in the story, or even the young man's thoughts. And then he has to kill his snake, which he sometimes loves.

What does it all mean? I haven't the faintest idea. It might be allegorical, but I didn't get the allegory. It's well written, but disturbing and sort of empty at the same time.
Posted by Jeremy Green at 7:14 AM No comments:

Enjoyable Australian rom-com set at a folk festival over a three year period; anyone who has ever been to a festival will find something to enjoy. Including a Theremin moment...

Some of the plot developments, and the anti-racist denoument - feel a bit contrived, but it's still good fun. Nice to see John Waters (Darcy from Offspring) and Deborah Mailman (Cherie from Offspring) in other roles.
Posted by Jeremy Green at 11:25 AM No comments:

Review of 'Distrust that particular flavour'

A collection of previously published non-fiction writings by William Gibson - articles from newspapers and magazines, introductions and forewords to other books, and so on - suplemented by Gibson's  responses to the pieces with the benefit of hindsight.

It's pretty good - well written, enjoyable - and Gibson's afterthoughts are both modest and perceptive. One of the pieces really stands out - The Road to Oceania, published in the New York Times in 2003. It seems to presage all of the Facebook/Cambridge Analytica scandal.
Posted by Jeremy Green at 11:19 AM No comments:

Review of 'The Tenderness of Wolves'

Historical novel set in rural northern Canada, that seems to have been on the point of being really good, but somehow wasn't. There's a good plot with some false leads, lots of the characters are interesting and have complex back stories, there's lots of great descriptions of the frozen north...and still, it's not quite there. There was a long period in the middle that seemed to have too much plot and not enough direction, and I must admit that I got a bit confused as to who all the characters were - some of them were not well differentiated from each other.

I stuck with it and ended up enjoying it, but it wasn't an entirely satisfying experience.

Also, there are almost no wolves in it, and those that are don't show any tenderness at all. So why the title? And the characters all seemed to bump into each other all the time, like they do in Game of Thrones. Is that really plausible in the tractless wastes of the frozen north?
Posted by Jeremy Green at 11:01 AM No comments:

Review of 'Only the Brave'

A film about US firefighters - not the ones in towns, but the ones who fight forest fires. The film seems to assume we either know or care a lot about the administrative structure of fire-fighting in the US - our heroes are a municipal fire fighting team but everyone else is a Federal government team, and there is some sort of status that results in them being called 'hotshots' that somehow means that they earn more money for the town when they fight fires in forests...from who? Not sure.

Anyway, it's a tale of heroism and male bonding among blue collar workers, and it's nice that for once this isn't about war or at anyone else's expense - not even the liberal elite or pointy-headed bureaucrats. There is nothing in the film about the debates around whether to 'fight' forest fires at all, let alone about climate change...fires just are, and they have to be fought. But its heart is in the right place, and I found myself gripped by what happened to the men of the unit.

And it's a true story, pretty much.

Watched on Netflix.
Posted by Jeremy Green at 9:00 AM No comments:

I saw this film in 1974 when it first came out. I'm pretty sure I watched it with my parents, who had been enthusiasts for the Peter Bogdanovitch's other black and white period movie 'The Last Picture Show'. I loved the film even then, though it's odd how little of it I remember...mainly just the bibles scam and Addie's intuitive grasp on the con game.

I don't think I appreciated, at the time, just how much it was a film of its time. Although the tone is generally quite light what's going on in the background is the Depression...every so often we see groups of ragged travelers in the background, with their meager possessions in suitcases or on handcarts. The look of the film recalls Walker Evans's photos for Let Us Now Praise Famous Men, and perhaps also The Grapes of Wrath - especially in the way Addie's face is lit.

And I couldn't help wondering whether, in 1974, it felt like this was a world that was now coming back - 1974 being the time of the first oil shock and the year that the post-war boom finally ran out of steam.

Watched in the Middle Floor at Springhill, on a big screen and (I think) via an old-fashioned DVD.
Posted by Jeremy Green at 1:09 AM No comments:

Review of 'How Far Can You Go?' by David Lodge

I think an apology is in order, to all my Catholic friends. I'm sorry, I didn't realise how miserable it has been. We joke about how there's Catholic guilt and Jewish guilt, and it means we have something in common in this C of E country...but nothing in my Jewish upbringing was remotely like the misery the young Catholics in this novel experience.

It's a story about a cohort of Catholic students and a few others around them (like the junior chaplain at their London college) and the way that the developments in Catholicism and the church play out in their lives. It's fascinating, and a bit frightening, because I had no idea that anyone in the modern world took any of this stuff seriously - I mean, I'd heard about indulgences and so on, but I had no idea that they were still a thing in my lifetime.

The book is - probably rightly - focused on sex, and occasionally love - so it's also an account of the 'sexual revolution' of the 1960s and 1970s, at least as experienced by a group of mainly middle-class educated Catholics. The reviews and the blurb indicate that it's supposed to be a comic novel, but though I enjoyed it there weren't many laughs, or even smiles.
Posted by Jeremy Green at 9:24 AM No comments: