Another Almodovar film in the Jane season, and they do keep getting better. This one has all the Almodovar tropes (junkie transexual prostitutes, mad old aunts, horrid priests) but woven into a complex and compelling narrative. In fact there are multiple layered narratives going on - I counted at least four levels of stories within stories, but it's five if you include the few minutes of a film with nuns that the characters watch. 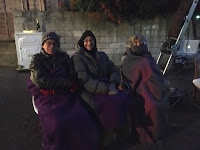 We watched this outside in Jane's back yard on a freezing night, wrapped up in blankets and warm clothes, and with hot water bottles. Even so it was very cold, but the film was so gripping that no-one thought about leaving. Not sure how we can manage many more though until it warms up a bit.

Posted by Jeremy Green at 12:51 AM No comments:

Review of 'The Many Headed Hydra: The Hidden History of the Revolutionary Atlantic' by Peter Linebaugh and Marcus Rediker 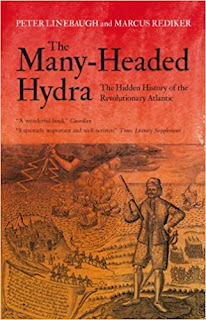 I really enjoyed this book - intellectual and social history, with lots of the best kind of political analysis but rarely inaccessible in its language. Lots that I sort of knew about...the Diggers, the Maroons, the revolution in Haiti (well, I've only recently read The Black Jacobins, and I grew up on The Kingdom of This World and also a novel about Henri Christophe that I think must have been Black Fire), but also lots that I knew much less about - the antislavery of the radicals in the English Revolution, the multi-racial solidarity of sailors in England and North America, antinomianism (I had to look that up).  I didn't know about the image of the hydra as a ruling-class metaphor for resistance, or of the extent to which Hercules is a symbol of ruling-class power. I knew a bit about the democratic culture of piracy, but I loved reading about it in such detail, and it's inspired me to read a bit more.

Inspiring and a reminder about why it's important to do History, and why struggles over memory are so important. I have mixed feelings about pulling down statues and renaming streets...I think that we if we erase the colonial past then what chance do we have of contesting the way it's remembered? But why isn't there a statue to the fabulous Edward and Catherine Despard, about whom much more should be widely known? Or at least a few streets or pubs named after them? Small afternote: there is a pub named after Charlotte Despard, who was pretty amazing but no relation of the other Despards.

Posted by Jeremy Green at 2:16 AM No comments:

A rather slow period comedy-drama that ends up being quite interesting, though I can't really say why without spoiling it. Good actors, nicely shot and staged (and it does feel a bit stagey and could probably be done as a play), with lots of period details. There's a reincarnation theme, something about loss and mourning, and quite a bit about dogs. If you are interested in any of those then it's worth the time.

Watched on Amazon Prime via Chromecast and smartphone.

Posted by Jeremy Green at 7:14 AM No comments:

Review of 'The Notebook'

Mainly slushy period-set love story about a young man from a poor background and a young woman from an affluent family who fall in love despite their tempestous and conflicted relationship and...

This is mainly slushy and over-sweet, though there's a split narrative past/present thing going on, in which the future old version of the young woman has dementia and only dimly recognizes the history as her own which is almost interesting. It's mainly a romanticised and implausible version of America, particularly the deep South where it's mainly set, in which most of the bad things - especially the racism - are taken out.

Ryan Gosling in it. Sometimes he's in good films, but this isn't one of them.

Posted by Jeremy Green at 7:10 AM No comments:

Review of 'As Ants to the Gods' by Alex Burcher 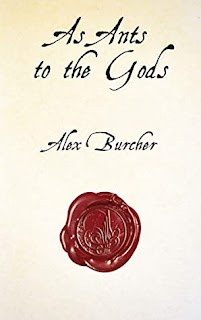 I really enjoyed this work of alternate history, which imagines the seventeenth-century world if the Moors had been victorious at the battle of Tours and gone on to conquer western Europe. It’s mainly a much more civilised, tolerant and educated world, though there are some jarring exceptions - amputation, branding and floggings as punishments for crimes, for example.

It’s got a complex and interesting plot, lots of alt-history detail (though I’m not keen on the device of a counterfactual within the counterfactual, which so many alt-history writers can’t seem to resist), including intellectual disputes within Islam (or rather the near-Islam of the book), not one but two secret conspiracies struggling for domination, and a thriving Norse civilisation in Europe and North America.

Some of the descriptions of violence were a bit graphic for my tastes - I know these things happen, especially in wartime, but I’m not convinced I need to know about every slash and bone-crush. But I liked the other details, and I liked the main character and quite a few of the others, including the Pepys-like diarist who befriends the hero’s family. I cared about what happened to them, and was emotionally involved with their stories - something that doesn’t always happen with alt-history. I look forward to reading more by this author.

Posted by Jeremy Green at 4:00 AM No comments:

Surprisingly good film about high-stakes poker...in the middle I lost it a bit, because everyone and everything (even the interior decoration, which that dark and gloomy stuff that Americans seem to think constitutes class) was so horrible. But we stayed with it, and it was worth it. The eponymous Molly is a driven young woman with dad issues, who falls into running poker games, and becomes illegal when she starts taking a portion of the pot to cover the debts that she's getting into, apparently because she is letting the high rollers play on credit. And then there's the Russian mob, and the proper Italian mob...

Nice to see Kevin Costner in a decent film and role (as the psychologist pushy dad) for once.

Posted by Jeremy Green at 4:18 AM No comments:

Review of 'Talk to Her' 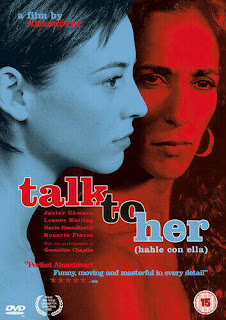 Another one in Jane's Almodovar season, and they keep getting better and better...and now I understand why it was worth bothering with all the bad ones at the beginning, because it's a pleasure to see a talent emerge...and also because some of the people that were there in the beginning are still with him as he matures.

This is a beautiful, clever, well-crafted film about two men with women partners in comas, and the bond it creates between them. One of the women is a dancer (and it's fair to say that the man is not her partner except in him imagination), and the other is a bullfighter, so there are some hard-to-watch bullfighting scenes. Hard to say more without spoilers, but it's really good and worth watching.

By 2002 when this is made Spain has changed from the repressive, repressed, religious society of the early films into a much more modern and liberal place. I note in passing that when one of the men visits the other in prison it seems more liberal, and decent, than any prison in the UK would be.

Watched in the round house at Days Cottage, on mac laptop and projector, having been obtained from informal distribution.

Posted by Jeremy Green at 4:13 AM No comments:

Review of 'Dirt Road to Lafayette'

Nice film about a young man and his dad visiting relatives who migrated from Scotland to the southern US a long time ago. The mother of the family, and the boy's older sister, have both died from a hereditary disease (unspecified) and the relationship between the dad and boy is very strained.  On their journey to meet the relatives they get stuck in a mainly-Black southern town, and the boy wanders off and hears some music playing...and then he joins in on a borrowed accordion, and we see him smile for the first time.

It's a film about redemption through playing music, particularly Zydeco. Weirdly, that's supposed to the theme of a German film that we watched recently, in which the promised redemption never happens. Hear, though, it does, and it's a real pleasure to watch this transcending racial, class and other divisions.

There's lots to like, including the acting and the music. The film doesn't hide the racism of the country, but it rather makes it look like Cajun/Zydeco music is one aspect of the US that appears to be genuinely integrated, at the level of the bands and the audience. It's great the way that it manages to both illustrate and distance itself from the religious weirdness that Americans take for granted, and most Europeans don't get any more - without being heavy-handed.

Based on a book by James Kelman, which I will try to read, and apparently there's no poster for the film, which is a first for me.

Watched on BBC iPlayer via smartphone and Chromecast.

Posted by Jeremy Green at 4:00 AM No comments: