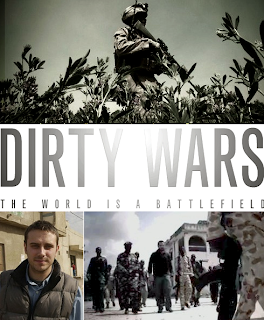 A documentary presented like...er...a faux-documentary thriller, with place captions to explain where the action is coming from next, arty shots through tunnels, and so on. But the message is a serious one, about the assassination squads and drone strikes  that are the body of America's 'War on Terror'. Scahill's film, which focuses on the collateral damage  of these tactics, is impeccably liberal. He is outraged that America isn't better than this, and he wants us to be be outraged about the continuity between Bush's strategy and Obama's. In truth there was little that outraged or even surprised me, except for the incident in which Obama personally intervened to keep a Yemeni investigative journalist locked up because he was getting near to the truth about the involvement of Americans in the obliteration of a Bedouin clan with no links to Al Qaeda who just happened to be in the wrong place.
Posted by Jeremy Green at 1:27 AM No comments:

I really didn't like this book, even though it is beautifully written and a good translation. I think that I don't like it because it is such a thoroughly Zionist perspective on the holocaust. It focuses on a group of German/Austrian Jews in a spa resort who wilfully refuse to see the increasingly obvious signs around them that something terrible is happening. While the 'Sanitation Department' fences them they continue to obsess about music and eat pastries. Even when the food starts to run out they refuse to see what is happening to them and what is so obviously going to happen.

At one level it's possible to see this as a universal fable about denial, but I think that Appelfeld, as a mainstream Israeli writer and a holocaust survivor himself is writing about more than this. His own experience of the Holocaust was nothing to do with that of German/Austrian Jews. He hid in the forests and served with a Red Army unit as a cook. But the Zionist narrative spends a lot of time on German Jews, even though they were a tiny minority of holocaust victims, because they illustrate so well the argument that assimilation is doomed to failure. Appelfeld emphasises how little the Jews in his story feel for their Jewish identity, how important German high culture is to them.

He also seems to have very little sympathy for them. They don't have any sort of inner life; we just see their increasingly obnoxious behaviour and listen to their pretentious speech.
It's hard to avoid the implication that they have brought their fate upon themselves, by their bad choices and their refusal to see what is going on. If this isn't victim-blaming I don't know what is.

[Spoiler Alert] If there is any doubt about this the final passage of the book drives the lesson home. The Jews are marched towards cattle trucks for deportation, and their 'leader' reassures himself that the filthy state of the train is surely proof that their journey will be a short one. Even as they are being deported he continues to believe the best of the Germans. It is very moving, and it moves you to where the author wants you to go. It doesn't seem to me to be an exploration of denial in general, or even about the holocaust in general, but rather a polemic against Jews who thought they were part of European civilisation.
Posted by Jeremy Green at 1:20 AM No comments: