The Solidarity Economy: An Alternative to Capitalism? 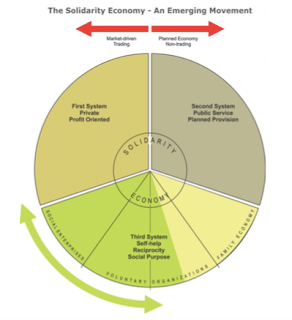 Last week I went to this event – a discussion about the solidarity economy. I’ve been thinking about this a lot lately. Partly in response to the Westminster political situation, where the Labour leadership is weakly held by a left social democrat with a touching faith in the ability of Parliamentary politics to bring about real and lasting social, economic and political change, despite all the historical evidence to the contrary. It seems to me that it’s unlikely that a Corbyn-led Labour Party can win a majority in Parliament; but even if it does, I find it hard to be optimistic that the ability to legislate will translate into actual power. That quote of Gramsci’s about the state being just the forward trench of capitalist power (which unfortunately I can't find at the moment) seems appropriate.

And I’ve also been reading lots of stuff that points in the direction of solidarity economics – Paul Mason’s Post-Capitalism, various things by Michel Bauwens, and this rather good digest (Techno-Utopianism, Counterfeit and Real) by Kevin Carson. I’ve had the tiniest dip into Negri and his ideas about ‘Exodus’, which are at once intriguing and semi-incomprehensible – other people’s paraphrases are easier to understand.

It seems to point in the direction of a future socialism growing within the body of capitalism, just as capitalism grew within the body of “feudal society” until it was ready to take political power. Mason, and Carson, and several others, seem to be arguing that the power of technology (3D-printing, the internet, smartphones, etc.) makes this possible in a way that it hasn’t been before. Maybe building things – specifically, economic entities like co-ops and exchanges and so on – is a better place to put energy, because it they do get built they’ll be there whoever wins the next election and the one after.
The evening was nice enough. There were some cheerful upbeat presentations of nice projects that were doing well, or were just starting out but sounded like they deserved to do well. Community Land Trusts, community benefit companies, and shared-ownership goats, multi-stakeholder co-ops, and so on.

Things that I noted were:


One of the speakers – (Tony Greenham, Director of Economy, Enterprise and Manufacturing Programme at the Royal Society of Arts) wondered aloud if it mattered what this fuzzy-edged phenomenon was called. Would ‘solidarity economy’ sound too…left-wing, and put off some people who might be otherwise enthusiastic? Like Transition Town types, for example, who like resilience and localism but are put off by all those clenched fists and red flags?
It was only a passing comment, and it wasn’t at all representative of the tenor of the meeting – other speakers were insistent that this emerging movement was a political thing – but I think it goes to the heart of one of the essential ambiguities in ‘solidarity economy’ and also the heart of my uncertainty about it.

What we call this thing will shape it. ‘Sharing Economy’ and ‘Collaborative Consumption’ are now, I think, irretrievably lost. They now refer to platform capitalism and ‘servitization’, not anything outside or antagonistic to capitalism. If we use another term that’s more palatable for ‘solidarity economy’ then it will be extended and shifted to include other stuff like that. This is similar to the mechanism whereby, if briefly, David Cameron managed to co-opt civil society support groups into a substitute for and assault on the welfare state.

I have a more serious concern than the name, though. I can’t help wondering whether the ‘solidarity economy’ will become a pit-prop for capitalism rather than something that will undermine, grow within and ultimately supersede it. After all, capitalism has always managed to sit next to non-capitalist forms of production. The most glaring example, to which socialist-feminists drew attention, was the way in which the ‘social reproduction of labour’ – getting the workers fed and cleaned and ready to go back to work again – was carried out in the sphere of the household/family, outside the terms of capitalist value creation. There were no wages for housework. Something similar happens in some places (Thailand, for example) with subsistence farming alongside capitalist industry. Workers can grow some food for themselves and thus the wage rate that the market will bear can be lower, because it doesn’t need to cover the full cost of feeding those workers. The relationship between the non-capitalist slave-traders of Africa and the Atlantic economy of capitalist agriculture might be another example.

So the solidarity economy could be more of a sticking-plaster or a safety-valve for capitalism, rather than the seeds of something that will eat it from within. Co-ops and community benefit companies can take over the labour-intensive, low-margin activities that capitalism can’t do all that well or all that profitably – social care, domestic work and ‘tasks’, car-washing without machines. Capitalism can keep high-tech manufacturing, and finance.

Does this really matter, if at least some people get to run their own decently managed employment? Yes, it does. Capitalism inherently makes for a more unequal society, and that makes everyone more miserable. Capitalism thrives and depends on the creation of unmet desires – unhappiness. And its financial model absolutely requires growth without end, which is in principle incompatible with a finite planet and in practice undermining the chances that humanity will ever find a way to leave within the constraints of our environment. We really do need to put an end to it and replace it with something better, not save it from itself.

I think what follows from this is that, as a minimum, solidarity economy activities need to be consciously about something bigger than themselves.  They ought to be located within the fabric and the context of a wider movement for social change that’s about equality, empowerment, democracy and sustainability. Worker-managers in the solidarity-economy organisations ought to know why what they are doing is important, so that they can do the things that matter better. If the wider movement is going to support them, with our wallets and with our campaigns (for example, for something like that Spanish social procurement directive), then we have a right to expect something more than a new generation of small business entrepreneurs.
Posted by Jeremy Green at 7:00 AM No comments:

Review of 'Free State of Jones'

Watched this after giving up on Ghostbusters - quite a contrast. Serious, thoughtful, lots of politics...a film about the class struggle within the Confederacy as some poor farmers, deserters and escaped slaves band together to defend their own rights to life, liberty and the pursuit of survival (there isn't much happiness in this film). Some very bloody battle and field hospital scenes at the beginning, but after that it's mainly quiet and beautiful to look at. Not obvious in the way that a relationship develops between the charismatic poor white and the escaped house slave woman, and most of that is left to our imagination.

A good account of the politics of Reconstruction, including some things I hadn't heard about - like the Union League in the South.

There's a lot of religion, and some themes that I think will resonate differently with Americans - the poor are able to protect themselves against the depredations of the state because they have guns. And our poor black and white heroes are betrayed by both the Confederacy and the Union; though they briefly think of themselves as fighting for the North, and  raise its flag when they take a town, they are let down and realise they can only look to themselves. I think even a right-wing Tea Party type would find much to enjoy in this film, despite its opposition to racism and the KKK.
Posted by Jeremy Green at 9:20 AM No comments:

Gave up watching this because it was so awful. I started with high hopes. I really like Melissa McCarthy - her character in Bridesmaids was enough to persuade me to give this a chance, despite the terrible reviews. I liked the original film (watched it with the kids lots of times), but I wasn't offended by the idea of remaking with a woman-centred cast, as so many of the people who threw shit over the film seemed to have been.

But it was dire - not funny at all. Obvious, contrived, perfunctory - rushing through anything that might have been a plot to get to the big scenes with the special effects (which frankly weren't that good either). Maybe it got better after 40 minutes, but I didn't stay to find out.

Watched in the Middle Floor at Springhill, through the projector and my laptop. Film obtained via an informal distribution network, for which I am grateful - imagine if I had paid to watch this.
Posted by Jeremy Green at 9:10 AM No comments:

Potentially interesting but ultimately disappointing high school comedy, in which student Ed finds himself increasingly involved with his terminally-ill neighbour who is a retired CIA assassin. The disappointment is because this film wants to have its cake and eat it - so Ed is at once a thoughtful intellectual who rejects the predominant jock-dominated school culture but also longs to be on the football team. Instead of exploring the tension the film just descends into conventional underdog sport tropes, which culminates in nerdy Ed scoring the winning touchdown and becoming accepted by the team and the school. Sure he makes fun of the coach and the football squad values, but ultimately it's all about the touchdown.

Similarly lovable ex-killer Ashby has a basement full of weapons and CIA memorabilia, but neither he nor the film questions the morality of 92 out of the 93 hits he carried out - only the local murder of an environmental protestor, which he was tricked into performing for selfish business reasons by three former colleagues who stood to benefit. Apart from that one none of the other murders causes him, or the film, any problems - it's OK to assassinate people who really were 'enemies of the state', you just mustn't kill people who have been wrongly designated thus. Ugh.

Watched on Netfix via Chromecast. This got 4.5 stars from Netflix's own ratings, which may be an indicator of how the US election is about to go.
Posted by Jeremy Green at 6:42 AM No comments:

I absolutely loved this film - that doesn't happen often. It's about a dad bringing his kids up in the US North West, away from a civilisation whose values he rejects. The kids are 'home' educated (home is a log-cabin-cum-tepee) to an extraordinary level. They spend a lot of time reading and discussing books, and the dad doesn't treat them as too young to understand anything - death, mental illness (their absent mother is bipolar, and much of the plot is about how the family deals with her funeral after her suicide), rape, drugs.

The film is sympathetic to the family's perspective. They aren't nasty right-wing survivalists, though they hunt and forage. They share a leftist perspective on capitalism and consumerism, and celebrate Noam Chomsky's birthday instead of Christmas. But there's tension, and conflict, and unplanned encounters with the 'real' world. There's a proper plot, with a crisis and its resolution (no spoilers here), and we gradually come to see that there's another way of looking at the family, its rejection of American values and its own way of life.

There's some good use of music, but little manipulative incidental music, which I welcomed - I hate it when there's music just to make you feel a particular way.

There's a lot of subtlety in the characterisations, and the children actors are really good - not mawkish at all. I wasn't entirely sure about the ending, but you can make up your own mind.

Watched at 6pm in a nearly-empty Phoenix Cinema in East Finchley.
Posted by Jeremy Green at 1:30 AM No comments: