A really good film about a supply teacher - how often do you get to write that? I was expecting a conventional 'inspiring teacher' or even 'cynical bad teacher' film, but this was much, much better. So much insight into the pain and humiliation of ordinary life, and the ways that people armour themselves against it. Some good acting (including Lucy Liu playing against type as a burnt-out school counsellor), really interesting camera-work, haunting incidental music. Well worth watching.
Posted by Jeremy Green at 2:24 AM No comments:

I enjoyed this much more than I thought I would. Sometimes Tim Burton's stuff is less than the sum of its parts. This was comic horror, a spoof on school movies and horror that worked quite well. I noticed the cinematic references to the original Frankenstein movie, and one or two to Godzilla; I've never seen 'Pet Sematery' but I suspect there were more references there, and others that I just missed. The science teacher who looked like Vincent Price was great (was his car, which was largely out of shot, a Trabant?), and I liked the way that the town meeting was so stupidly anti-science - a reversal of the original Frankenstein story, which is itself anti-science. And science mainly saves the day at the end, some of which is actually a bit scary for comic horror spoof.
Posted by Jeremy Green at 7:48 AM No comments:

Review of 'The Phantom' - really, really, don't bother with this

Tosh, and not even likeable tosh. I know it's supposed to be a comic, but does it have to be so dull? Sort of sub-Indiana Jones, but with a character so near-omnipotent, and so devoid of complexity of any sort, as to rid the film of almost all interest and suspense. Really, compared to The Phantom Indiana Jones is Hamlet. Oh, and it's casually racist in a sort of TinTin way, with a fictional 'jungle' setting that doesn't correspond to anywhere in particular though it has a British garrison and native servants in turbans.

The dullness is ameliorated somewhat by a quite young (27) Catherine Zeta-Jones as a beautiful but sinister baddie in what appears to be black silk jumpsuit, but she turns good about two thirds through, so that ruins that.
Posted by Jeremy Green at 9:18 AM No comments:

Review of ‘Still the Enemy Within’ 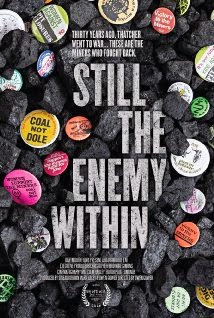 This well-made, insightful, thoughtful documentary about the 1984-5 miners’ strike in the UK was painful to watch, because it’s impossible to forget that the story ends with a bitter defeat. Subsequent events have demonstrated that the miners’ militant leadership were absolutely correct in their assessment of what the government had planned for the industry and the communities of people who worked in it. The extent to which the government was prepared to go in subverting the very rule of law which it accused the miners of seeking to undermine has also become clearer, as has the complicity of the right-wing media in propagating utterly false smears about the miners’ union and their leaders.

That the miners were proved right, and the government shown to be nasty, doesn't make it any easier to watch. The whole awful 1980s experience came flooding back – the Wapping dispute, Rate Capping, the Falklands War triumphalism, the 1987 election, Section 28…I could literally taste it all. Much of it bound up with a particularly windy corner of Swiss Cottage where we did collections and street stalls. For me it was slightly worse because the first interviewee, to whom the film keeps returning, came from Frickley Colliery, the pit which adoped by my then constituency Labour Party, Hampstead and Highgate.

The film attempts to end with a positive note, showing some of its interviewees marching on an ant-cuts demo, with a sort of ‘the struggle goes on’ message. But this obscures rather than clarifies. In the 1980s the labour movement was actually confronting the state and its masters; traipsing through the streets on a protest march is not the same thing at all. Somehow this made it worse.

This is a great film, and anyone interested in progressive politics should watch it, but unlike "Pride"there aren't many laughs or a happy, uplifting ending. This is a lesson in defeat, the kind that you can see coming but are powerless to prevent. As I left two women behind me, who might have been comrades from that time, were talking about the possibility of a film about the Wapping dispute. A good idea, but can I be spared having to watch it?
Posted by Jeremy Green at 8:18 AM No comments:

Review of 'Stuck in Love'

Slightly genre-defying - is it a romcom, a family drama, a coming of age movie, or what? The poster seems to go for serious drama (and there are some drug overdose scenes, and some adult language and sex bits). But quite nice, and enjoyable in a slightly indulgent sort of way.

Dad Bill is a middle-ranking writer who has brought his kids up to be writers too (he pays them to keep journals instead of taking McJobs), and they appreciate this. The parents are divorced, but he's still waiting for her to come back to him. The most talented of the children, the daughter, can't forgive her for leaving him and doesn't speak to her mother, but really it's...well, you get the idea. Some teen comedy tropes, some writer comedy stuff, and lots of interesting but not laboured stuff about relationships - between adults, between teens, between adults and teens. There are worse ways to pass 100 minutes.
Posted by Jeremy Green at 2:12 AM No comments: