The Floating Finger of Blame; My super idea for an Internet of Things start-up

An add-on to project management software for large organisations. A software agent identifies whose fault it is that a project is off-track or behind schedule. The agent then controls a giant floating hand with a pointing finger to hover over the person responsible. A premium version ensures that the hand will track the relevant person as they move round the building. Options to include audio stream 'It's all his/her fault'. Also customisable for organisational culture, so as to identify either the most senior person who can be blamed or the most junior.
Posted by Jeremy Green at 1:09 AM No comments:

Review of 'Not Another Happy Ending'

A lightweight film about books, writers, publishers, occasionally amusing but not really quite good enough. A brief hint of the misery of rejection letters (the young author has them pinned up on a 'wall of pain', and some stuff about not being able to get down to writing, but mainly it's just unexpected celebrity, awards ceremonies and signings. There are a few bits of tension and character dynamics - the unspoken attraction between the author and her publisher, the shitty screenwriter boyfriend who moves in with her, the absent dad who is the main focus of her first book and turns up at a reading...but mainly it's all just fun, hallucinatory conversations with an imaginary friend, and impossibly good hair.
Posted by Jeremy Green at 6:08 AM No comments:

Review of 'The Imitation Game'

Two weeks since I saw this, and still no review - probably because there's so little to say. It focuses on Alan Turing as played by Cumberbatch, thereby making him out to be a near-autistic geek. I understand that the real Turing was charming and sociable, but films like to represent people who are good at science and maths as awkward as a sort of consolation prize for the rest of us. You know, they understand maths but we can talk to people normally, so yah boo.

Most of the story, including the possibility of Soviet spies, was already told by Enigma, which I think was a better film.

A few things to note, though. MI6 are the goodies, and their desire to intercept and read everyone's communications completely justified by the lives saved - I don't think the real MI6 was nearly as interested and involved in this. And the decrypt, and Colossus, are presented entirely as the result of the genius of Turing and his very small team - though actually Bletchley was an industrial-scale code-breaking installation, and Colossus was built by lots of people, and not just a bunch of posh boys.
Posted by Jeremy Green at 12:52 AM No comments: 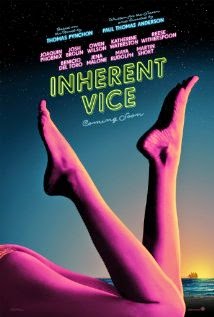 I really love Pynchon’s books, but I haven’t read the one that this film is based on (yet). If I had the film might have been a disappointment, though the reviews are mainly so bad that my expectations had already been managed sharply downwards.

In fact it turned out to be pretty good – I didn't find the voice-over narrative at all annoying, as some critics have suggested it would be – it was an opportunity to enjoy some Pynchon-esque language, though that is also well represented in the dialogue.

It’s a bit of an art director’s film, in that it looks great – you can almost smell the grease on the hippie characters’ hair and the dirt on their feet. The textures are all there too, and the film is suffused with sex even though not much of it actually happens on the screen.

There were times when I literally lost the plot, as I've done in the novels too. I think that’s partly because it sits somewhere between a detective story and a parody of one, so that the plot is deliberately over-complex with lots of telegraphed twists and turns – and I'm not sure it actually makes sense as a whole. I must read the book.

Great soundtrack, somewhat spoiled by the fact that the North Finchley Vue Cinema insisted on playing it through a speaker slightly smaller than the one on my phone, and stuck in the bottom left hand corner of the screen. And while we’re on the subject of the venue, why whack the air-conditioning up to max on what must have been one of the coldest nights of the year? Just saying.
Posted by Jeremy Green at 12:30 AM No comments: