Already. Before they actually did anything about it. At least according to this research from the Institute of Public Policy Research.

I suspect the research is probably right, and demonstrates the hopelessness of trying to stop climate change one energy-saving light bulb at a time. The main effort has to be focused at policy and technical standards, and at changing the supply-side. Trying to change attitudes and behaviour will deliver too little, too late.
Posted by Jeremy Green at 2:05 AM No comments: 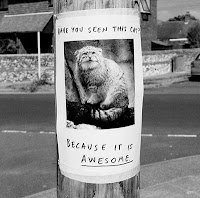 Always wondered whether those 'Lost Dog' notes posted on trees ever resulted in any dogs (or cats, or parrots) being found. Why should the routes taken by the lost dog correspond to those taken by the note-posters? The latter must put them up in what they consider to be their own locale but they probably don't ask the dog if it has a similar mental map. Or they didn't, before it got lost.

Delighted to see that a note posted on the gates of my local park has now been updated with 'Found - Thanks!' written across it. So they must work, at least some of the time.
Posted by Jeremy Green at 7:57 AM 1 comment:

On Friday 9th October I attended a workshop on Climate Change and Violence organised by Crisis Forum, and held at Senate House in central London. This was the third in the series and was entitled 'Securing the State: Domestic Agendas”. I was attracted by the combination of academic and what can only be described as “practitioner” speakers – a retired Real Admiral speaking on 'what happens to societies and countries after catastrophic shock' and a policeman from the Centre for the Protection of National Infrastructure (who'd heard of that?) speaking on 'Nodes and Networks: The Evolution of Security and Terrorism'.

It turned out to be quite a lively day. The morning kicked off with a presentation on risk by Edward Borodzicz for Portsmouth University, followed by one on Flooding in the UK by Tim Randall of the Oxford Disaster Management Group. The latter included some references to an interesting document from Munich Re-Insurance looking at catastrophes over the past 50 years (which seem to have increased in frequency and magnitude). Lots of references to other material, including the UK-CIP impact model for flooding and the Eurobarometer research on perceptions of climate change. There was, though, a slightly unpleasant undertone, especially in the discussion that followed, that seemed to suggest that everything was the fault of the Chinese; this seemed particularly unhelpful to me – it's equally possible to point to lots of positive developments in China, including some of the absolutely enormous wind farms that they are building.

In the afternoon we had the presentations from the practitioners. The Rear Admiral spoke about Iraq at some length, and about the impact of Katrina on New Orleans (which he made some effort to call “N'orlins”). The policeman spoke about how the state took responsibility to safeguard us all from terrorism, how climate change might make terrorism worse or more frequent, and how the bad guys might incorporate responsibility for climate change and resource conflict into their 'single narrative' of conflict with the West which they used for recruitment.

Not all of the liberal academics in the audience liked this very much, and one argued that the two presentations together were more like propaganda – at which the Rear Admiral very theatrically flounced out, claiming that he hadn't come there to be insulted. (Interestingly, he responded rather menacingly to the critic, who happened to be a black woman, that he could say things that would be just as offensive to her, which would cause her to walk out of the room – a new mode of racist insult, in which it's enough to insinuate that you know the appropriate epithet and don't need to use it, perhaps?). And one can't help thinking that if the senior ranks in the Navy can't cope with really quite mild questioning of their perspective, who do they conduct discussions internally?

Funnily enough the policeman, whose presentation was actually much more propagandistic, didn't take offence at all, and happily carried on chatting through the coffee break and the rest of the day. And the Rear Admiral's presentation (apart from a marketing pitch for navies as agencies of emergency relief) actually contained some very acute observations – notably that the agencies which are supposed to prepare for disasters make a very poor job of it because they plan for not-worst cases, and that gangsters almost always seem to make a very good job of responding. One can't help thinking that this deserves some further analysis; what is about these kinds of informal economic organisations that makes them such flexible organisations? After all, they tend to be hierarchical just like formal organisations – perhaps it's just the absence of paperwork...

The seminar ended with some much more acutely academic presentations on urban planning, which were less interesting for me, and a panel session, which was very stimulating.

Key take-aways for me were: a better understanding of how likely extreme events are; a sobering realisation that communities are more likely to collapse than rally round under this kind of pressure (though there are creditable exceptions); and a reluctant acceptance that the state probably doesn't care that much about maintaining my security, but is nevertheless may represent a better bet than organised crime.