Review of 'The Zero Marginal Cost Society' by Jeremy Rifkin 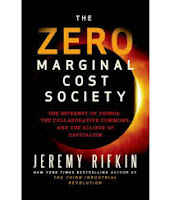 An interesting book with occasional flashes of brilliance - or at least brilliant exposition. It covers much of the same ground as Paul Mason's Post-Capitalism and Kevin Carson's 'The  Homebrew Industrial Revolution' - but in a mode that's less explicitly political and more oriented towards a mainstream business/economics audience. I can't help thinking that in writing this he had one eye on MBA reading lists and future consulting opportunities.

Whereas Mason, and Carson in a different sort of way, appreciate that the tendency of capitalism to reduce the cost of making stuff is a contradiction that can be resolved in a number of ways (not all of them with happy endings), Rifkin treats it as an inevitable 'trend' that's inherent in the logic of technological advance, and more or less inevitably leads to a "sustainable cornucopia" (one of the chapter titles).

On the other hand Mason's analysis is situated within some esoteric debates within the history of Marxism that most normal people don't want to know about, and Carson links his very detailed and careful analysis within the context of 'freed market' anarchism and some equally questionable optimism about decentralised modes of political organising that seem to me to be already trashed by recent history.

Rifkin is a good clear writer, and his heart is in the right place. He knows that more stuff doesn't make us more happy, and that the quest for happiness through stuff is trashing the planet. Still, this seems oddly dated for a book published in 2014. There's no Uber, no Amazon Mechanical Turk, no Deliveroo - the whole idea of Platform Capitalism is unacknowledged even as a possibility.  Bitcoin gets one paragraph and the Blockchain not a mention; so he's soppy about community currencies, most of which have turned out to be disappointments, and the relationship between technology and hyper-capitalism is also not discussed. He's relentlessly upbeat about the sharing economy with no understanding of the potential for a dark side, and apparently no thoughts as to why mainstream corporations are so excited about the Internet of Things or their plans for 'servitization'.

And oddly nothing about the potential for surveillance or data harvesting...was there really no-one talking about that as recently as 2014?

This is definitely worth a read, but it needs to be read in conjunction with Peter Frase's Four Futures: Life After Capitalism, which sketches out alternative, less benign future scenarios. Perhaps also alongside "Radical Technologies: The Design of Everyday Life", which is a sort of mirror-image dystopian version of the same developments, without much acknowledgement of the liberatory potential of the technology that is arriving.

Final thought; I can't help mentioning the irony that I read this book in a dead-tree version that would have cost me £17 if I hadn't borrowed it from a friend.

Review of 'The Mummy'

Probably the worst film I have ever seen - a pointless remake that wastes some box-office names in a meaningless confused hotch-potch without a proper plot or even the most basic sense of geography. Lots of bangs and crashes, and life-sucking demons, but nothing coherent. Utter rubbish. Even Tom Cruise deserves better than this.

Watched in the 'Movie Lounge' of Cap Finisterre, a Brittany Ferries ship crossing from Bilbao to Portsmouth. I watched it because it  passed two hours that otherwise would have been spent looking at grey sea. As it turned out that would have been more enjoyable.
Posted by Jeremy Green at 6:29 AM No comments: