Dave Rosenberg's The Battle for the East End 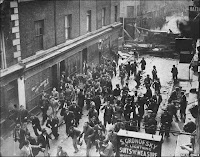 I really enjoyed reading this, and learned a lot about a struggle that I thought I already knew about. There is a lot of detail, and some really well chosen anecdotes and presentation of primary material. It would have been nice to have had more pictures, though these are available in lots of other places.

It's a very generous book. The author freely admits that most pre-war BUF members went on to fight for Britain against Hitler. He acknowledges Mosley's personal charisma, and the extent to which his economic ideas were genuinely advanced and even progressive. He's more than generous about the role of the Communist Party in the fight against Fascism, though he gives appropriate space to dissident Communists like Joe Jacobs who have criticised the sometimes dismal tactics adopted by the Party (until the 11th hour of the Battle of Cable Street it was telling militants to stay away from the East End and go to a rally for Republican Spain in Trafalgar Square).

In fact, the only group about which he's not generous is the official Jewish leadership, principally the Board of Deputies. It's easy to despise the supine, cringing attitude of the Board - which argued that Fascism per se was not a Jewish issue, and that it placed full trust in the tolerant culture of the British people and the institutions of the British state. But that's been the political strategy of Jewish leaderships pretty much everywhere for at least a thousand years, and while it's not pretty it can be said to have worked, at least for the leadership groups themselves, for most of this period. Allying with the authorities to seek protection from popular discontent is what Jews have done. Since most rebellions and insurrections up to the modern period failed, it was a strategy apparently justified by history. And it's not obvious, at least to me, that when these leaderships praise the wise and tolerant authorities, that they are as stupid as they seem to be. It is at least possible that they understand what they are doing - that they know that the British people are actually at best ambivalent about immigrants, but that they think it's wiser to praise them for their tolerance, and then to appeal to that 'better nature' than criticise them for their lack of it. They might be wrong, but that doesn't make them stupid.

My other criticism is that the book doesn't locate the Jewish struggle against Fascism in the East End in terms of the overall politics of the CP. It was Mosley's misfortune that the critical time for his movement coincided with the CPs turn to the strategy of the Popular Front, and that this strategy seems to have been successful in the context of the Jewish East End in a way that it was not pretty much everywhere else. By and large the CP's strategy of allying with the "progressive wing of the bourgeosie" was a terrible failure. In Spain it led to the crippling divisions within the workers' movement and the persecution of the left. But among the Jews of the East End, where the 'progressive businessman' was at least not an oxymoron, it made some sort of sense. The immigrant community contained lots of people who identified with the left even though they are middlemen, professionals, or petty traders.

It sort of sticks in my throat to see the CP characterised as 'democratic forces'. Actually this is the CP of Stalin, and its fight against Fascism was about to take a most unusual turn. The strategy that it adopted in fighting Fascism was always subordinate to foreign policy needs of Stalin's USSR. Maybe the Jewish People's Council was not only a CP front, but it didn't survive the CP's twists and turns, and it didn't become an alternative centre of gravity for the Jewish community.

Nevertheless this is a great, readable book which I heartily recommend.

Posted by Jeremy Green at 12:34 AM No comments:

I made some kvass. I'd had it from a stall in the Soviet Union in the late 1980s, and it had stuck in my mind as a nice not-too-sweet soft drink.

I mainly used this recipe but I also followed the 'raisin in each bottle' technique from another recipe. I bottled it in PET water bottles and I gave them a good squeeze before I screwed the lid on. Even so they fermented a lot, and several of the bottles exploded, a bit like in this video.

Still, the kvass was nice, if not exactly like the one I had in the USSR. It was a bit darker. I suspect that this mildly fermented drink is a bit like what the 'small beer' that they drank in the middle ages was like.

Posted by Jeremy Green at 6:40 AM No comments:

Putting my review here, in case the tax-dodgers at Amazon get grumpy and refuse to publish it.

"Lots of interesting information about debates within Judaism, Christianity and Islam, but a rather partial account that focuses on the intellectual content of these debates rather than their social, political and institutional context. So lots about the debate within Orthodox Christianity about whether God has one substance, or whether he is three or one person, but nothing about the process whereby Christianity became the state religion and how that related to the need for a single position on doctrinal matters. Similarly with Judaism - you'd think Hasidism emerged just as a reaction to intellectual currents within rabbinic debates; the massacres of the 1640s, and even the name of Chmielnicki, don't even figure.

Perhaps more important for this atheist reader, there is a sleight of hand which is barely acknowledged. The God worshipped by Judaism, Christianity and Islam is a personal God, and the idea for him emerged from a tribal deity that was very much associated with some human and some super-human characteristics. The God of the philosophers - some distant first cause without any personal or human characteristics - is a very different entity (or as she would have it, not actually an entity at all, but something more profound). It might make sense to build a set of social institutions around placating and 'worshipping' the personal God, but the second one can only be contemplated. Worshipping it makes no sense. And yet religious clever-clogs, and people who make a living out of religion, somehow manage to conflate the two. It would be unfair to say she doesn't write about this, but I didn't see it satisfactorily addressed.

That said, there were some really good parts in the book. This is the first time I've ever understood why it was so important for the Greeks to have those rows about the essential nature of the trinity - it was an argument about the limits of human understanding and cognition, which is important for us now in relation to cosmology and physics, but the Greeks didn't have the instruments, so they made it a discussion about God. And she also touches on the way that the Romantics replaced a sense of the divine with a sense of the aesthetic, particularly in relation to nature. As one who only has what other people call spiritual feelings in relation to this sort of thing, it's nice to know it has a lineage, and it actually made me want to go and read Keats and Wordsworth.

So all in all, time well spent, despite a nagging feeling of dissatisfaction about the book."
Posted by Jeremy Green at 12:06 AM No comments: