Review of Danny Dorling's "Inequality and the 1%'

A very good, passionate but closely argued book about inequality with a focus on Britain. As another reviewer has written, the anger comes through, but so does the unassailable empirical evidence. Well organised and unarguable...though a short pamphlet-style one like some of his other books would be great too. It's a sign of how dominant the neo-liberal ideology is that I found myself wondering whether the fact that 1% have so much has anything to do with why others have so little...can it be as simple as that? Yes, it can.

Also worth noting that I found it hard to read, not because there's anything hard about the writing but because it made me so angry and miserable, because so powerless. I was strongly tempted to give up, which provides some insight into why so many people would rather read trash about celebs than engage with reality and power.

There are those (like Thomas Piketty?) who argue that this kind of capitalism is flawed and unsustainable, and that it contains the seeds of its own self-destruction. I am not sure about this. As James Meek writes in the LRB, one reason why we don't spend more time angry about the hyper-rich is that they already seem to exist in a different reality from the rest of us - it's easier to be angry about the 'benefit scrounger' next door.
Posted by Jeremy Green at 2:43 AM No comments: 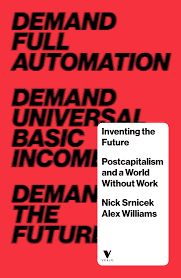 There’s much to like in this interesting and somewhat unusual book of left-wing political theory, and quite a bit to dislike too. It’s thoughtful, reflective, and critical, and at the same time optimistic and positive. However, it’s also deliberately written in the language of the academic philosophy department (or maybe the critical studies department), which makes it obscure and difficult in places. I’m aware that there’s a strong anti-intellectual current in British cultural life and the British Left, and that there are people who will react badly to any attempt to use specialist language to describe complex phenomena. But there are words in this book that I don’t recognise, much less understand; the dictionary on my Kindle didn’t recognise them either. ‘Hyperstitial’ must mean something, but none of the definitions I could find were at all helpful in understanding the way the authors used it. In fact, there were whole sentences and paragraphs that meant nothing to me.

I’m also OK with intellectual name-dropping, if it’s done in a way that’s sympathetic to a non-specialist reader. I think Paul Mason is really good at that, so that the non-specialist reader ends up feeling like they’ve been introduced to something new and interesting, rather than feeling stupid for never previously having heard of the person cited. Unfortunately, there was more of the latter than the former here. This is particularly unfortunate because it is in part a call for ‘organic intellectuals’ a la Gramsci, and also because it elsewhere condemns impenetrable academic language. For the most part I can’t see how the wealth of academic citations enhances the authors’ argument, though I do see how demonstrating familiarity with this burnishes their academic credentials.

This is particularly annoying because there is so much about this book that is great. I was thrilled to read the demolition of what the authors call ‘folk-politics’, by which they mean the unquestioned conventional wisdom and practices of the left. There is a really well thought through critique of the way the left prioritises direct action (stunts and marches), localism and the absence of leadership and power. It makes a lot of useful distinctions between vanguards and representation, acknowledges that transparency and clandestinity both have their places, and recognises the differences between all sorts of activities as useful tactics and elevating them to a principle. It recognises, too, the need for a division of labour, between movement and party and campaign groups and think tanks. It’s not an organisational manual, but it’s not a bad place from which to start writing one.

I also liked the emphasis on the need to confront the future of work, and the impending destruction of those ‘jobs’ that have survived globalisation and flexible labour markets by automation. I rather suspect the authors under-estimate the challenge that is involved here – I can’t help thinking about the way that attempts to introduce a shorter working week and longer holidays have not gone well in, say, France. But the argument for doing this, and the way that they raise it, is very strong. There is a strong account of why we can’t just go back to the days of good old social democracy with male breadwinners and family wages, and an argument in favour universal basic income/citizen’s income that is closely intertwined with this.

It’s positive and future-centric too, arguing that the left needs to reclaim the optimism and association with modernity that it once had, and which it has largely ceded to the ‘modernising’ right. It calls for more utopias, and more learning from utopian communal living experiments about alternative ways to organise everyday life, even though it’s not very excited about local initiatives and temporary autonomous zones – seeing them as a part of the problem of the left’s inability to countenance the need to develop power strong enough to combat that of capital. In this it must surely be right – it’s hard to avoid the way that it’s much easier to write and sell dystopian visions on the left. If we can’t even dare to dream, how can we dare to win?

The third theme – about embracing technology and its ability to re-shape what it means to be human – left me somewhat colder. Firstly, because it was the section of the book most shrouded in difficult language (synthetic freedom is something we ought to aspire to, apparently), but also because there’s just something uncomfortable about the prospect of using technology to simply escape the human condition. I know that this is confused, confusing and difficult ground. I know that there is a strand of ‘conservative’ thinking on the left, and particularly in the greener stretches of it, that privileges the ‘natural’, sometimes in a way that is a bit unthinking. But equally, I’m aware that most of the remaking of the self that has taken place to date has been under the influence of capital, and I think a certain wariness about that kind of remaking is warranted. There is quotation from Trotsky somewhere (which I admit I am unable to find) about how when we've solved the material problems of human existence we’ll be able to confront the essentially tragic dimensions of the human condition. I'm in sympathy with this; I think that a left-wing version of ‘transhumanism’ that seeks to overcome ageing and death, or do away with the process of childbirth in favour of something cleaner and less troublesome, would make us something different to humans. This isn't part of my personal political objectives, and I don’t see any reason why it should form part of the objectives of a renewed, vigorous, successful, left.

There’s lots more to say about this book. It mentions lots of ideas and concepts that deserve further exploration, and it does act as a gateway to important discussions and material elsewhere. There are some great references to the ‘cybernetic engine’ deployed in the Allende government’s planned economy, and to the participatory economy. Not many leftist texts will have a reference to the Blockchain, not even now. It ignores some work that I think it shouldn't – Polanyi’s stuff about the way that capitalism not only created ‘economic man’ in theory but also in reality is important, as is his discussion about motivation in pre-capitalist societies.

But this is definitely a worthwhile read. I just wish – hope, perhaps – that the authors will write it again in a way that makes it accessible to those to whom it ought to be addressed; the new generation of activists who may not find a place in Sociology Departments or Critical Studies courses, but will nevertheless be engaging with capitalism at the sharp end. They certainly need a new, thoughtful perspective on what they are trying to do and how they might do it better and more effectively.
Posted by Jeremy Green at 7:18 AM No comments:

A gloomy Danish film about a man who gives up his dream life with beautiful wife in Stockholm to come back to Copenhagen to run the family business from which he’s earlier walked away  – because his father has committed suicide. Lots of nastiness within the family because the brother-in-law who has been helping to run the business is aggrieved and tries to undermine him with sly fraud rumours, the gorgeous wife has to abandon her own successful career as a serious actress, and so on.

In a period setting it would be a great illustration of the role of deferred gratification in the process of capitalist accumulation and the rise of the bourgeoisie. In modern Denmark it’s relentlessly miserable – our protagonist does his duty and becomes absolutely committed to the firm at the expense of his own happiness, breaking the promise he made to the gorgeous wife to limit his involvement to two years, shafting his loyal friends and family members. He has a drink-fuelled meltdown, tries to rape the chambermaid at the villa where his wife and new son go for a recovery holiday, and finally lets his wife (and son) go and replaces them with the woman his dominant mother prefers.

Well acted, some  good cinematography (especially the steelworks, but also the claustrophobic bourgeois house interiors).
Posted by Jeremy Green at 12:52 AM No comments:

Review of 'Far From The Madding Crowd'

Perfectly acceptable adaptation of the Hardy novel - was it really necessary given the earlier one with Julie Christie? I dunno...this was watchable and engaging enough, though didn't leave me with any profound thoughts. Except...what's the law if you do remarry after your husband has been declared dead, and then he turns up? And why was the rascally Frank, who is apparently high-born, a sergeant? Did I miss something?

Watched on a laptop propped up on a coffee table - didn't trust the HDMI cable to display properly from Windows...
Posted by Jeremy Green at 9:18 AM No comments:

Review of 'The Princess Bride'

Watched again after a long break, and having read the book in the meantime. A fun film, a fairy-tale with its tongue in its cheek. Some good jokes, lots of enjoyable dialogue, quite nice to look at. Fun too to spot the actors – Mel Smith, Peter Cook, Billy Crystal…

For the record the mechanics of watching were interesting and complex. We watched this on the screen via the projector in the Middle Floor at Springhill Cohousing. We started watching on a laptop connected to the projector, using a copy obtained via informal distribution. The visuals started to stutter so we switched to watching a DVD on the built-in player of the projector. But that gave up half-way through – apparently it does often. So we switched to a VHS cassette (poor reproduction, and no sound) and then to another DVD player that was also connected to the projector. Ho hum.
Posted by Jeremy Green at 9:13 AM No comments: