A biopic of Marie Curie that I quite liked, though the reviews are all terrible. Nice to Rosamund Pike playing against type as an older woman who's not a romantic character, and I quite liked the occasional bits of weirdness (dream sequences and the like) in the narrative. Some of the flash-forwards to show how radioactive worked out for everyone (the atom bomb, radiotherapy) seemed a bit laboured, but I was quite satisfied with the film, including the dialogue (which some critics hated) and the settings.

Watched on Amazon Prime via Chromecast and tablet.

Posted by Jeremy Green at 11:52 AM No comments:

One of those films in which a whole village conspires to deceive an outsider (it reminded me of The Grand Seduction) - in this case the man from the lottery, because the bloke who has won the six million pound jackpot has died with the winning ticket in his hand, and the two men who find him decide that one of them will impersonate the deceased so as to claim the winnings. It's mainly comic, despite the death thing, and nicely done, with lots of good village-life detail. Not too long, nice music and stunning landscapes.
Posted by Jeremy Green at 6:02 AM No comments:

Review of "All About My Mother"

Another Almodovar film (part of the Jane Opher program), and another good one - he's obviously hit his stride by now. This one has everything that you expect from Almodovar - junkies, prostitutes, transexuals - but now they are proper characters in a proper film with a plot. Curiously this one starts with the same plot device as "The Flower of My Secret" - a woman faced with the death of her son who has to deal with the transplant doctors' request for his organs, and as in that film, it turns out to be a training video that she's making. Only this time the woman, who is a transplant nurse, then does lose her son almost immediately afterwards in an unpredictable car accident, and then has to deal with the same situation for real.

Hard to convey the plot without giving too much away (in fact I have already spoiled the car accident death thing, haven't I?) but it's complex, and on the boundary of plausibility, but gripping and full of pathos.

Watched at Days Cottage in a beautiful roundhouse yurt, on Jane's laptop and projector, the film having been obtained by informal distribution.

Posted by Jeremy Green at 6:46 AM No comments:

Review of 'Flights' by Olga Torkarczuk

Oh my...an unusual, amazingly different sort of book...one of the weirdest and most 'modern' that I've ever read. It's described on the back as 'a novel about travel in the twenty-first century and human anatomy', but it's not a novel in the sense that I was expecting or (I think) most people would understand. There aren't characters, there isn't a plot or even a continuous narrative. It's a series of fragments with different narrators. Sometimes they are like substantial short stories with engaging characters and situations, and some of these resolve and some don't. Some are only a few sentences long. Some re-appear through the book, and some don't.

There's an anatomical theme, but it's as much about anatomists - and how the discipline and its skills developed - as it as about the subject matter. There's a travel theme, but it's mainly not about the places we go but how it feels to travel, to be dislocated and in the liminal places that are involved in the process of travelling...airports, departure lounges, the tunnel on to the aeroplane, and so on.

I absolutely hated this book for the first 150 pages, and that would normally be quite enough for me to give up, content that I'd have given it a fair go. But it was for a book group so I ploughed on, which was a good thing because it has turned out to be rather an amazing experience that I'm glad I didn't miss. A meditation on the human condition, an exploration of identity and self and physicality, and beautifully written.

Posted by Jeremy Green at 12:20 AM No comments: 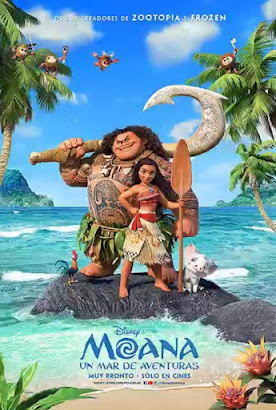 As with Frozen, I think I'm not the target market for this Disney film, but I wanted to catch up on it. There was lots to like. The visuals, especially the tattoos and the animated tattoos on the Maui character, really look Polynesian, rather in the way that Frozen acknowledges the Sami visual culture. It's thoroughly pagan, with no concessions to a Christian world-view. There aren't any redeeming white people - it's just a Polynesian story. The heroine is a little girl, and one of the other significant characters is her grandmother. But it's not hard to see why it isn't a Disney classic. The songs are mainly not great, and the sidekick animals - a pig and a chicken - are not good enough to inspire affection or humour. Which is a shame, because there's a lot to like. I loved the depiction of the outrigger canoes, especially the big ocean-going ones that make an appearance at the end. And the way that Moana learns to do the Polynesian hand navigation theme is great, and represents part of the film's homage to the navigational feats of the Polynesians.
One thing I didn't like, though, was the implicit message of the ending - that it's important not to be confined by the ecological constraints of your island. There's a song early on that says 'The Island Gives Us Everything We Need', but it turns out to be wrong - the answer to the ecological crisis that besets the islanders turns out to be partly magical, but also involves learning to voyage beyond the island again, as the ancestors did. Which is a nice anti-colonial message, but not a good one in terms of recognising ecological limits and learning to live within them. I can't help thinking of the nutjobs in California who think that Elon Musk's private rocket program is the 'answer' to climate change.
I
Posted by Jeremy Green at 4:58 AM No comments:

Review of "The Luminaries" by Eleanor Catton

I just loved reading this book. I was led to it by the BBC TV series, which I enjoyed - but the book is so much better. The TV series was quite a free adaptation, and doesn't stay true to the narrative of the book - unsurprisingly it telescopes the plot, gets rid of some complexity and characters, and so on. Curiously it makes much more of the astrological affinity between Emory Staines and Anna Wetherell - that barely gets a mention in the book, even though it does do some of the heavy plot explication.
The last part seemed a bit disappointing, almost as if the author thought it had gone on long enough and needed to be finished - which it does in a series of very small vignette-like chapters, all of which are set in the period before the main narrative. But I still loved it sufficiently for that not to matter.
Posted by Jeremy Green at 4:44 AM No comments: