Review of 'The Handmaiden' 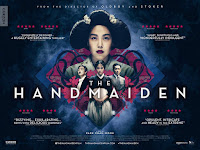 A remarkable film - lots of plot twists (helped by the fact that I hadn't read the book on which it is based, though I knew about it), fabulous to look at, lots of wonderful Korean and Japanese period and setting detail. But also remarkably sexually explicit for a mainstream film, and a lot of cruelty, sexual and otherwise. Long, but never boring.

Watched at The Phoenix Cinema in East Finchley.
Posted by Jeremy Green at 8:23 AM No comments:

Review of "Their Finest"

A really good film - with quite a few laughs, though I wouldn't really call it a comedy. I was touched emotionally and personally by it in a way that I hadn't at all expected.

It's set in London during the blitz, and it feels very realistic. It can't do the smells of Underground shelters, but it does the texture and the sounds very well, recreating a world before synthetic textiles and materials. It rather connected me with the mindset of Brexit voters; for many people Europe must never entirely have lost the association with the place from which the BEF had to be rescued and from where the bombers came. The film does have a bit of a Brexit vibe - look at the poster.

Most of all it made me think a lot about how much trauma and anguish my mum must have gone through at this time. Her family stayed in London during the worst of the blitz - her parents didn't want the children to be evacuated because they believed it was more important for the family to keep together. Recently I've been directed to read this article about epigenetics, and I guess that part of my heritage - either genetic or psychological - is my mum's lived experience of the bombing of London. It struck me that the essence of the blitz experience was the randomness and meaningless of death - one character dies in his flat, another misses a bomb because she worked late that night. Isn't that a perfect description of the 'learned helplessness' model of depression? Has anyone else made the connection between this and the apparent epidemic of affective diseases in post-war Britain?

Normally I hate films about film-making...they strike me as over-indulgent. But I really liked this, even though a lot of the jokes and plot turn on the mechanics of making a film. Couldn't help thinking about what it must have been like to have watched a war film, about the evacuation at Dunkirk, with an audience full of people who had actually been there.

Watched in the Crouch End Arthouse Cinema at an early show on a Tuesday evening, with almost no-one in the audience.
Posted by Jeremy Green at 11:35 AM No comments:

Sad and beautiful film about two cowboys (well, shepherds really, though one of them does ride in rodeos) who discover that they love each other. They live their lives in relative misery, waiting for the little time that they spend together back on the mountain in 'fishing trips' that don't really fool anyone, least of all their wives.

It's the late 1960s and early 1970s, and I couldn't help thinking how much happier they'd have been if they'd left Wyoming/Texas and gone to San Francisco. But they can't - at least the Heath Ledger character can't, because though he's more or less disconnected from almost everyone, he is still connected to his kids and doesn't want to turn his back on them. I once had an email conversation with a secretly atheist hasid, about why he didn't leave the community that he clearly held in such contempt, and he answered in much the same terms.

Watched on the big screen at Springhill, via informal download.
Posted by Jeremy Green at 11:10 AM No comments:

A Spanish western, set in Bolivia in the 1920s, with a not-dead-after-all Butch Cassidy planning to return to the US to meet up with the son he's never known, but instead getting mixed up with a fleeing Spanish mine engineer who has committed a robbery and is now being chased by a relentless indigenous posse who look more than a little like the Pinkertons in the original Butch Cassidy film.

It's a western with a lot of shooting and horse scenes, but it's not so bad - some interesting young/old dynamics, a bit about what happens to people who spend their whole life chasing something (Stephen Rea as the Irish Pinkerton who has never believed that Butch was dead), and a decent enough twist.

Watched on TV via Chromecast and BBC iPlayer.
Posted by Jeremy Green at 11:04 AM No comments:

Review of "Priscilla Queen of the Desert"

Haven't watched since the 1980s...I remember feeling rather uncomfortable watching it then, because drag queens didn't fit with my vision of what gay men ought to be like. More than twenty years later, and we're all less prescriptive and more open about different ways of identifying, but I still didn't really enjoy the film all that much. Not much happens, the characters don't develop, the scenario of drag acts in rough little outback towns where the country audiences don't appreciate them is repetitive...and the bitchy queen jokes start to pall quite quickly. And the act is really not all that good - it's just a matter of watching the costumes really. The drag queens don't dance all that well, they don't sing at all...Also annoyed by the way the Terence Stamp character does the one thing that you are really, really supposed to not do when you break down in the desert (leave the vehicle and go off to look for help) but it turns out well. Shouldn't there at least be a 'don't try this when you break down in the desert' warning?

Watched in the Middle Floor at Springhill via informal distribution.
Posted by Jeremy Green at 10:57 AM No comments: