Grump about the Cardinal

The radio news kept repeating the 'story' that Cardinal Cormac McWhatshisface is going to give a lecture in which he will warn about the increasing hostility faced by 'the church' -- though he's kinda vague on what church, or what hostility. He is apparently going to talk about the threat this poses to freedom of religion. Forgive me, but when did the Catholic Church start supporting the freedom of religion? When did it become a Good Thing for them? When it did, was their any acknowledgment that this was a change in the official position, and any apology for previous endorsement of the opposite view.

I must have missed that bit...obviously it's happened after they stopped burning heretics and making non-attendance in church a crime. Or maybe it's only a good thing in certain places, where catholicism is not the established religion. I think we should be told.
Posted by Jeremy Green at 3:30 AM No comments:

Email ThisBlogThis!Share to TwitterShare to FacebookShare to Pinterest
Labels: Personal, Politics and Economics, Random and Miscellaneous

No-one seems to have noticed that the theme music for the BBC series "Lark Rise to Candleford" bears an uncanny similarity to the Yiddish song "Oyfn Pripitchik". Is this just a co-incidence? I think we should be told. Without meaning to cast aspersions, is there scope for composers to plunder the storehouse of klezmer tunes -- as long as no-one recognises them?

It's made more amusing by the fact that "Lark Rise" is so very English.
Posted by Jeremy Green at 5:37 AM No comments: 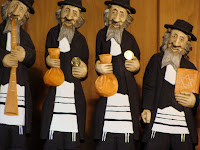 As the Carol Thatcher row got started, and the predictable right-wing response about how this was yet another case of "political correctness gone mad" began to gather steam, I reflected on how the mainstream commentariat would react to anti-semitic caricatures turned into dolls. After all, post-holocaust, anti-semitism is supposed to be even more taboo than anti-black racism. I remembered hearing someone - (Howard Jacobson, in the "Roots Schmoots", maybe?) mention that such dolls actually did exist and were sold in Poland. So I thought I'd look for a picture of them, post it, and see if it shamed any defenders of the Gollywog. (I found these Jewish dolls, delightfully depicted with their money bags and boxes).

My mistake was to search for "Jewish Puppet" rather than "Jewish Doll". I was unprepared for the volume and rancour of the images and words that this search uncovered. There's a little bit of me that thinks that we Jews sometimes make too much fuss about contemporary anti-semitism, because in my liberal professional life I rarely encounter it. But my "Jewish Puppet" search revealed to me the extent to which the Jewish conspiracy theory is alive and well on the web. Try it yourself.

It also made me think about the limits of liberal anti-racism, which focuses on terms like discrimination and prejudice. Gollywogs physically embody a racist caricature. The toy and the depiction mean that white people don't meet real black people in an unmediated way -- they bring to the meeting all sorts of ideas and reactions derived from the caricature.

But the stereotype of the Jew is not for the most part about 'prejudice'. The content of anti-semitism is not about beards or long noses, it's about the idea that Jews are clever, powerful and greedy for more power. That's why 'discrimination' seems like an appropriate response to the 'gollywog-like' black people, but genocide is the appropriate response to conspiratorial world-dominating Jews.
Posted by Jeremy Green at 2:57 AM No comments: