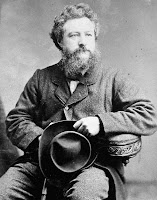 I went with friends to the William Morris Gallery on Saturday. It was a lovely day, the gallery had lots of beautiful things to look at, and items from Morris's personal and business history. Morris was for the most part a top bloke - against anti-Semitism in the left at a time when it was mainly acceptable, an opponent of authoritarian tendencies in the SDF and a genuine democrat, with awareness of the ironies of his position as a supplier of fancy furnishings to the idle rich.

So what is it about him that gives me the creeps? Partly I think it's the whole Merrie England thing. There is a long tradition on the right of celebrating a pre-industrial time of harmonious, organic community, before capitalism and industrialisation. Philip Blond, the 'red tory' and sometime advisor to David Cameron on 'big society', is one of the latest manifestations of this, but it has a long pedigree among both the mainstream right and the far right. Sometimes these people call themselves 'Tory Anarchists'. It's mixed up with a preference for Medieval art and craft alongside imagined Medieval social relations. Chesterton is a very articulate spokesman for this ideology.

The trouble is that there are those on the left who are attracted to this - they like the idea of small communities, simple life, self-sufficiency, localism, craft work rather than industrialisation. Of course there are left-wing versions of this too...and some versions that are just not too picky about who they hang out with. I don't have a problem with localism; I do have a problem with those who can't tell the difference between friends who advocate it, and enemies who affect to for entirely other reasons.

I think that my problem with Morris is that he is just too close to all this - the medievalism, the preference for craftwork over industrial production; even though he is himself a decent sort he acts as a sort of gateway drug for reactionary ideas within the left.
Posted by Jeremy Green at 2:15 AM No comments:

This is the only Saudi film I've ever seen (well, a Saudi-German co-production) and it was thoroughly depressing. It focused on the life of a young girl in Riyadh, who is a bit of a tomboy and wants to have a bike so that she can race with a her young male friend - they are both about ten.

The depiction of the life of women - young and old - is so sad, and so oppressive, that it for once made me feel ashamed to be male. Every aspect of life is controlled and repressed; most of the repressing is done by other women - teachers, parents - and most of it is about conforming to an impossible code of modesty and honour.

Some of the posters for the film (not the one on the right, they must have used a different one in the UK) give the impression that there is a certain coming-of-age, feel-good dimension to the film; they show the girl's foot on the pedal of the bike. Actually it's nothing like that at all, just unremitting misery for most of the running time. The closest thing to it is The Handmaiden's Tale, except that this is real, not science fiction.

Good thing that the EDL are not smart enough to organise sponsored showings all over the country. It's hard to feel warm about Islam after watching this. Just as well that I know that the Wahhabism  that the Saudis are successfully spreading throughout the Muslim world is not the only kind that there is.

Posted by Jeremy Green at 9:13 AM No comments:

A really enjoyable, beautiful modern black and white silent film - funny, sad, totally engaging. Loosely based on Snow White, this is a very Spanish film, with lots of heavy Catholicism and bullfighting. It's set in the 1920s (ending in 1929), that is during the proto-fascist dictatorship of Primo de Rivera - though there is no sign of this. Except for a brief glimpse of a Zeppelin over the bullfight ring, there is almost no sign of the modern world at all.

But it is really beautiful, lots of stunning composition and cinematography, great silent acting, and some really good visual gags. And the wicked stepmother Encarna (played by Maribel Verdu, and somewhat reminiscent of Joan Collins) is really, really wicked. I note in passing that she enjoys S&M sex with her lover, the family chauffeur, who she also collars like a dog in one scene. As I have written elsewhere, these days only S&M sex is transgressive enough to count as really dirty in films. Vanilla sex is just too commonplace to have any symbolic force.
Posted by Jeremy Green at 12:33 AM No comments:

Actually, they did tell me all of this when I did A level economics in the 1970s

...which is no reflection on Chang, just on how far mainstream economics has become dominated by ideology and equations. There is nothing in here which would be a surprise to any economist (or politician) from outside the Anglosphere. Neo-classical economics doesn't describe the real world very well and is a poor basis for economic policy or business strategy. Pretty much everyone seriously interested in economics knows this except the kleptocracy in whose interest the UK and USA are both run, and their lackeys who help them do the actual running. Come to think of it, they probably know this too, but it serves them well to keep the rest of us doped up on free-market fairy tales.

This is nicely written - very clear, ordinary language, not an equation or a diagram in sight. It's not by any means anti-capitalist. HJC says 'capitalist is the worst system apart from all the others', and he clearly means it. This view is not really examined, and there is no real consideration of any of the alternatives, apart from the way that the USSR tried to do socialism. There isn't even a proper evaluation of that.

Still, it does at least point out that there are other ways of doing capitalism, and that there is some theoretical justification for this within economics as well as from ethics and politics.  Perhaps some New Labour policy wonks will read on the flight over for their next fact-finding trip to America, and perhaps something will seep in and remain next time they have to write a briefing paper. Perhaps.
Posted by Jeremy Green at 4:01 AM No comments:

Review of The Company You Keep

I absolutely loved the book, and I only quite liked the film. Even though it was an independent production, it still felt Hollywood-ized. At times I felt the book was just a tad too sympathetic to the Weather Underground, but there was no such danger with the film. I haven't done a textual comparison between the book and the film's dialogue, but it felt like most of the politics had been squeezed out of it. There wasn't much sympathy for the Weather people at all - all of that was reserved for those who wanted out of it. It was much more of a conventional 'clear my name' and 'fugitive' type film. The FBI agents didn't seem menacing - the close-ups humanized them. The Osbornes didn't have the right-wing populist politics that they had in the book. And the actors were all much too old - Robert Redford looked at least 70, which made the chronology a little nonsensical.

Still pacey and enjoyable, but a missed opportunity.
Posted by Jeremy Green at 3:35 AM No comments: