What's mine is yours 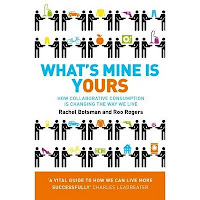 Hats off to Rachel Botsman and Roo Rogers for writing this. They've synthesized and evangelized some disparate trends to show that there is something in common underlying them – a rejection of stuff in favour of services on the one hand, and relationships on the other. They've linked this to the sustainability agenda (because the production, consumption and disposal of stuff is wrecking the planet), and to the happiness agenda (because having more stuff doesn't make you happy, any more than eating more stuff does).

They distinguish between three different kinds of collaborative consumption – Product Service Systems (buying a service – like a rental car instead of a product); Redistribution Markets (like Ebay, but also Freecycle – to move stuff between people instead of making or trashing stuff); and Collaborative Lifestyles (the exchange of intangible assets like skills and time in moneyless contexts).

The book has a long introduction on how we got to here – the genesis of advertising and the creation of wants, planned obsolescence, and so on. The downside of this is it feels a bit padded – as with a lot of books about the new economy, what could have been a tight magazine article or series of blog posts has been blown out to make a book. Although it contains some fairly contemporary stuff, it's already out of date – no mention of Cameron's “Big Society”, for example. It's very anglo-american too; does nothing like this happen in Europe? Don't they do this sort of thing all the time in the developing world?

It's also a bit boosterish. There are times when it admits that a phenomenon doesn't really fit with their argument – a lot of what is sold on Ebay now is new stuff, so that it's become primarily a distribution market rather than a redistribution market – part of the problem rather than part of the solution. But it trips over this lightly, as if it doesn't really matter. It doesn't look at the antecedents of the product service system – after all, renting is hardly new. In the 1970s most people rented their color TV's because they were expensive and tended to go wrong. And businesses of all kinds are really keen to turn their product lines into service lines, because it makes for a continuing revenue stream – look at all the rubbish warranties that they are so keen to sell us, and the pay-as-you-go models that are becoming so common for IT equipment.

It also ignores the environmental impact of services, which can be at least as damaging as stuff; consider the airline industry, or the hotel industry. Just because it doesn't fill your house doesn't mean it's not trashing the planet. Not to mention the way that so many product service systems seem to make for such rotten jobs; at least manufacturing provided some skills and some dignity. Try working in a call centre, or a materials separation facility.

And it doesn't acknowledge the consequences of its own arguments. It trumpets that it's not anti-business, or anti-capitalist. But in the absence of a philosophy that takes in production for need, not exchange and accumulation, we really do need to keep making stuff and buying it and throwing it away. Our jobs, which allow us to pay the taxes which enable the welfare state, are premised on economic activity, which is mainly the circulation of stuff. We could have another kind of economic system, but if we don't, then stopping the flow of stuff throws us all out of work.

Nevertheless, it's an enjoyable read, and I'm glad it's been written and published. I think the book will help to spread the idea and make it seem more cool and attractive – even if Botsman and her consultancy are busy helping big business to work out how to take advantage of the trend. It's down to us to make sure that collaborative consumption becomes an element in the construction of a new genuinely human economy, rather than a cosmetic layer on the old one.

I wonder if the authors would be pleased or sorry that I ordered this book from the library rather than buying it?

Posted by Jeremy Green at 3:20 AM No comments: