Using a Globastar phone in Wales 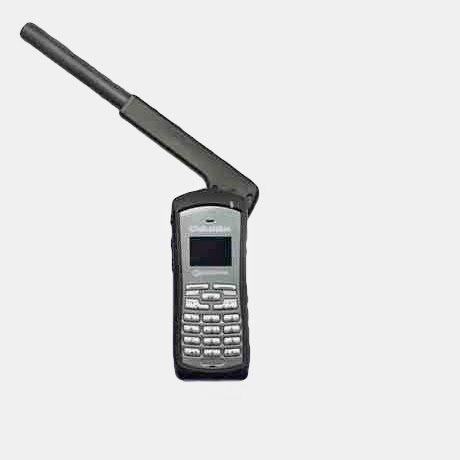 More than fifteen years ago I worked in the mobile satellite services industry, helping to develop a handheld satellite phone business. ICO Global Communications, the company that I worked for never made it to service launch; but part of my role was competitor intelligence, so I had the opportunity to use an Iridium phone during a holiday in Morocco. Then, the phone was huge and vaguely weapon-like, the service was dreadful even on a beach with a huge sky, and I also found cellular coverage wherever I went – even in the Atlas Mountains.

Still, I was a bit thrilled to have the chance to try out a Globalstar handheld last week. The Pembrokeshire coastal path turns out to be much less well covered by cellular signal in 2014 than the Atlas Mountains were in 1998, and I badly needed to keep in touch with my parents because my father was unwell.

The Globalstar phone, a GSP-1700, was much cuter. It still had the solid, rotatable aerial, but extending it no longer looked like I was deploying a ground-to-air missile. The phone itself was about the size and shape of a mid-1990s cellular phone with a similar monochrome look and feel. It was lighter, though, and with a pleasant hand-feel.

It was really easy to use – I never looked at the manual or documentation – and worked very well once I'd got used to the fact that it did take a little longer to acquire a signal. It didn't work in the shadow of buildings or under wet trees, but other than that it was reliable and straightforward.

And the voice quality was great – clear and with no perceptible delay or echo. Much better than the voice quality that I got when I did occasionally pick up cellular signal, and actually better than much of my experience with cellular even in urban areas. The phone really did help me to 'connect with family even when my adventures took me out of coverage', just like it says in the PR material.

Nice to know that the mobile satellite service industry came right in the end, even without the benefit of my contribution.
Posted by Jeremy Green at 3:06 AM No comments:

Here - and there is an associated page (in German!) about financing cooperative housing, which looks worth a read too.
Posted by Jeremy Green at 11:55 PM No comments:

A really weird one, this. Focusing on the process of adapting a book for a film, and illustrating the difficulties of this rather well, it also details the miseries of introversion (indecision, fear of humiliation), and sibling rivalry (Nick Cage plays the screenwriter and his twin brother). Bits of it are really uncomfortable to watch, but it's oddly compelling. It's well made, and the acting is good. It changes pace and tone towards the end, but that's part of the point and the frame-joke.

I suspect that there are lots of Hollywood in-jokes in it, and could imagine watching it again with someone more knowledgeable explaining them all to me.
Posted by Jeremy Green at 12:29 AM No comments:

Robyn Davidson wants to walk across the central Australian desert from Alice Springs to the Indian Ocean with camels. She does. The end.

This is a surprisingly straightforward narrative. We don't get much insight into what the journey meant to Davidson (there is a bit of exorcising inner demons from her mother's death, but not much). Early on she says she is drawn to the beauty of the desert, but most of the time she just scowls at it and wipes her sweaty brow with the back of her hand.

There aren't many characters, and there isn't much tension. The romantic relationship promised by the poster on this page (not used in the UK, I think) is not delivered; she has the odd shag with the photographer appointed by her sponsor, but it's a bit perfunctory.

We know she's going to make it, and that sense of certainty is never undermined. Quite how she manages this while apparently walking naked, without a hat or even sunscreen, and in the most inappropriate footwear you could imagine, is the only real mystery.

The music is nice but the desert looks horrible for the most part.
Posted by Jeremy Green at 12:23 AM No comments: