Review of 'Magic in the Moonlight'

Silly, pointless, a bit dull. The dialogue is hopeless, the characters uninteresting and poorly acted (were the cast moonlighting on this while they actually worked on something more substantial?), and the mildly interesting plot wasted through a series of missed moments. Only the sets, and the occasional set-piece reconstruction (mainly the jazz clubs and cabarets) are worth looking at. I fell asleep a few times but didn't seem to miss much. Just worth noticing how awful Colin Firth is in this, compared to how good he is in 'Before I go to sleep'. Is it that he didn't care, or are actors just as good as the script and the direction?
Posted by Jeremy Green at 1:42 AM No comments: 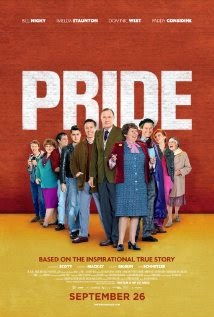 A lovely, uplifting film. Well, it was for me, anyway. These days (not in the period it depicts) I have friends with a wider range of views, and I'm sure some of them won't find its depiction of working-class solidarity in the face of state repression, prejudice and corporate-sponsored asset stripping that uplifting. For me, though, this was beautiful, poignant, funny, and very enjoyable. I was involved in a miners' support group in North London - well, all right, in Hampstead and Highgate Labour Party - and I felt a little flicker of pride in my own small connection with this.

Super acting from all your favourite British actors, especially Bill Nighy and Imelda Staunton, and they must have had so much fun with the art direction.

I wasn't expecting a surprise ending - after all, we all know that the miners lost. But I really didn't know about the NUM contingent at the front of the Gay Pride march in 1985. A big lump in my throat for that, and actual tears for the singing in the working men's club.

A small final observation, which is hinted at near the end, when the Pride organisers try to take banners with political slogans out of the 1985 march; support for gay rights is now pretty mainstream,  and 'apolitical', whereas in the 1980s the Tories thought that opposition to gays was a vote-winner; Section 28 of the Local Government Act prohibiting the 'promotion' of homosexuality wasn't introduced until 1988, three years after the film's setting. On the other hand, solidarity with workers on strike now feels like it belongs to the age of chivalry. The two movements passed each other along the way, and this film captures that moment.
Posted by Jeremy Green at 12:44 AM No comments:

Review of 'Before I Go to Sleep'

Easily the scariest film I have seen in a while - well, I don't really do scary. This is a tense psychological thriller about a woman with a memory disorder who can't remember anything that has happened to her since her early twenties, and wakes up every morning with all subsequent memories (including those of the previous day) wiped clean. Anything else I say will be a plot spoiler, but I can say that the acting is great (I don't know if emotions really look like what Nicole Kidman performs, but there is no doubt that she is communicating them powerfully), the casting superb (you'll know what I mean when you've seen it), and the plot full of twists that I didn't see coming. Woke up in the night thinking about it.
Posted by Jeremy Green at 3:31 AM No comments:

An interesting science fiction film with a strong political message, about inequality, hierarchy, resistance - and also a warning about geo-engineering as a solution to climate change as part of the backstory. Some good actors (especially Tilda Swinton channelling the ghost of Thora Hird, and John Hurt doing a sort of Alex Guiness), great art design, a slightly plodding script (did the dialogue have to be so lacklustre).

And really very violent - lots of blood and gore, horrible fight scenes that go on and on. I don't mind a bit of gore in a film, but this really felt over the top and surely means that fewer people will see it. Actually, to the best of my knowledge no-one has watched it after it was 'released' in 2013 - has it ever been shown in cinemas anywhere?
Posted by Jeremy Green at 3:26 AM No comments:

Time to hang up that skull and crossbones flag...?

Here’s a funny thing. A few years ago, in a piece for Ovum about the long-term future of telecoms and all that, I segmented the consumer market into three categories: Digital Citizens, the mainstream consumers of media content and applications; Digital Metics, those largely excluded from the digital world by reason of poverty, transience, lack of skills, or even choice; and Digital Outlaws, who rejected the mainstream world for a DIY ethic and an interest in encryption, open source, free content, and so on.

I thought of myself as belonging in the latter category, even though I’m not that much of a hacker. I used Linux (Ubuntu) on my personal laptop. I used a G-Box for my smart TV. I got my content through BitTorrent kind of on principle. I even used an alternative version of Android on my Samsung smartphone.

In the space of about a week I’ve ended up turning my back on almost all that. My new laptop, an Asus X550C, won’t play nicely with Ubuntu (it won’t recognise the wireless connection, or even install properly). We despaired of the G-Box, which needed to be rebooted almost every time we used it, and made it fiendishly difficult to add a new channel ever, and we bought a Chromecast instead, which has turned out to be rather brilliant and really simple to use. Ruth got herself a Netflix subscription. And I got a new Samsung phone, and I can’t face going through the tortuous process of installing Cyanogenmod on it when it’s working quite well at the moment and I can’t think what the actual benefits would be.

Right now I don’t think this is a permanent change of mindset, but perhaps the mindset will follow where the behaviour has led. I’ll keep an eye on it.
Posted by Jeremy Green at 6:21 AM No comments: